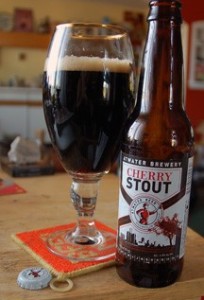 I love a good cherry beer. Always have. Always will.

My first successful homebrew experiment was a cherry stout, using as a base one of the recipes in Charlie Papazian’s landmark homebrew book. I distinctly remember using way more cherries than Charlie called for.

It was my first time cherry picking. I went to southern Fond du Lac County to do the picking, at a hilly orchard in a pretty agricultural area.

I don’t remember how many pounds Charlie’s recipe called for, and I don’t know where my copy of the book is to look it up. Suffice to say that I added a lot of cherries to this stout. Had to. In my cherry-picking zeal, I had picked 60-some pounds of cherries. I think I followed the cherry stout with a cherry wheat, and then a cherry lager. That was the summer I turned the household refrigerator into a lagering cave.

Have I told you this story before? If I have, blame the cherries. That’s what they do to you.

Cherry Stout from Atwater Brewery of Detroit has a nice cheery cherry flavor infused deep within the stoutness of the base beer, which is a chocolatey stout. Good stuff. Nice mix of flavors – the tart cherries bouncing around inside the darkness. 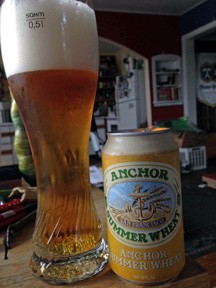 The first time I ever heard the expression “lawnmower beer” was during an interview with Fritz Maytag of Anchor Brewing. I forget exactly when we talked – let’s just say many beers ago – but I do recall that Anchor was just releasing a summer lawnmower beer. I forget the name of the beer and I didn’t see it on the Anchor website, but I was reminded of that conversation with Fritz when I opened the fridge and my eyes fell upon a six-pack of Anchor Summer Wheat.

Was that the beer we talked about those many beers ago? I can’t say no for certain, but I really don’t think so. I was surprised to find an Anchor Wheat, and to my mind that means I had never seen it before, even though the brewery website claims it has been produced since 1984. I am certain the lawnmower beer Fritz and I talked about was something else, which also leads me to believe if I don’t recall it, maybe it wasn’t so hot?

Because I definitely remember early encounters with Anchor Steam and Anchor Porter. I particularly remember the years on Maui in the mid to late 1980s when we would drive to the other side of the island from where we lived to go to Wiki Wiki Pizza, a shoreside pizza place that served Anchor Steam on tap. I remember at the time thinking $8 pitchers were outrageous, but still worth the travel and cost in a world of bland beers.

Sorry I never heard of Anchor Summer Wheat before this. This is not your typical wimpy American wheat. It is big, bright, spicy and bold, perfect for the cup holder on your rotary push mower.