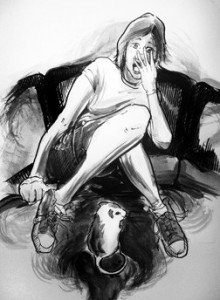 6:03 pm: Amber yawns between munching on kernels of microwave popcorn with an extra dash of table salt. She tucks her legs under her on an oversized armchair contemplating switching on the television as she runs her palm over her unshaven calf and lazily sings, We’ll always want, but we’ll never get. But a dreamer’s still a dreamer, till you wake them up…

A tree branch with orange and red leaves taps against the window. She considers a shower and a shave.…and sit them down and explain to them the sky is up and the earth is down, amongst other things, like human beings…A burst of laughter from the ladies knitting in the shop below sounds beneath Amber…they aren’t what they seem…and then a scurrying, a movement, a shuffling across the faded green carpet.

“Oh my, god. Oh my, god,” Amber whispers, dropping a kernel propped between her greasy fingers. “Oh my, god.” A brown mouse pauses beneath the turquoise table on which the television sits.

“Mom, mom, there’s a mouse.” The critter’s beady eyes gleam from beneath the table. “What do I do? What do I do?”

“What should she do, Greg? She’s scared.”

There’s an exchange of the phone. Amber’s body shudders at the sound of sudden laughter from the knitting ladies below.

“Why don’t you call your landlord?”

“Well, just call your boyfriend – he’ll take care of it.”

“He’s not my boyfriend anymore.”

“I don’t know their number.”

“Don’t you have a phone book?”

“I’m not moving from this chair.”

6:27 pm: “So, where did you see it?” Toby smooths his burly, unkempt beard with a calloused hand while Amber stands on the armchair and points below the television. A teenage girl with pouty lips, a high ponytail and volleyball kneepads around her ankles stands at the screen door checking her cellphone.

“Over there,” Amber says. “It went behind the book case when you were climbing the stairs.”

“Do you think there’s more?”

Toby removes his blue and gold Gibraltar Vikings hat, pulls up his worn blue jeans and grunts as he lowers himself to the dusty carpet.

“Oh yeah, there’s some mouse crap down here,” he exhales. “I have some traps in the truck.” He rises and puts a hand on his daughter’s boney shoulder, “Missy, why don’t you put away your phone and just sit down for a minute?”

“Oh yeah, sit down,” says Amber. The screen door slams shut. Missy half smiles and sits on the pale beige couch. “You have a roommate?” she asks.

“I think she and her boyfriend are getting dinner at –”

“Do you have a boyfriend?”

“Yeah,” Missy crosses her legs and smiles, revealing a silvery row of braces.

“That’s cool,” Amber clutches her legs to her chest and continues to scan the carpet.

“He got me a ring from Claire’s when he went to Green Bay. I don’t have it on because I was practicing, and we’re not supposed to wear jewelry when we practice, but it’s pretty.”

“It has a blue diamond – well not a diamond, but it looks like a diamond. There’s a matching necklace for it. I’m going to wear it tomorrow because it’s game day and we dress up for game days.”

“Huh. So, does your dad take you on calls very often?”

“No, he just picked me up when your dad called and said it was an emergency.”

Toby swings open the screen door with an arm full of black plastic objects, hollow cardboard boxes. A pail with green blocks dangles from his elbow.

He explains the purpose of each object as he places them around the apartment. “They’ll go looking for water after eating this – so the idea is that they won’t die in your house. But if they do, they mummify so you won’t smell them.”

“I’m not scared of mice or snakes or spiders,” says Missy rising from the couch. “I’m scared of bats though. My friend got bit by a bat when she was camping and said that it ruined the entire trip.”

“And these white boxes,” continues Toby, “the inside is layered in glue, so they’ll get stuck and die.”

“You should be all set,” says Toby.

“Really? You can’t just grab it and throw it off the porch?”

“What about the knitters? You could ask them,” laughs the voice on the other end.

“No!” Amber shouts then lowers her voice as the murmur of the knitters’ voices sounds beneath her. “I don’t want them to know the same place they buy their yarn is infested with mice.”

“Why don’t you call Brian?”

“You know why. Don’t be a jerk,” Amber says as the white box shakes and taps against the floral wallpapered-wall. “Please. I called Katie, Tyler – they’re not answering – and I can’t call the pest guy – he just left.”

7:24 pm: “So, what am I supposed to do with it?” laughs Dustin, holding the cardboard rectangle in his hand. The mouse’s pink tail alternates between frigid and slack as it continues to struggle.

“Where?” laughs Dustin. “The garbage?”

The screen door squeaks open and slams closed. Dustin laughs as he walks cautiously down the wooden steps.

Amber inhales and exhales, But now just close your eyes and start dreaming, dreaming…Branches tap against the window. “What is wrong with me?” she whispers, before taking up the song once more…about candlelight, forget about stupid fights.

Dustin brings in a gust of crisp autumn wind, “Do you want me to tell you what I did with it?”

“You okay?” He smiles, unbuttoning his khaki coat.

“I have to go to the bathroom really bad.”

“You want a beer?” asks Amber as she rises, tucking her hair behind her ears. “I think we have beer – it’s Katie’s beer, but she won’t mind.”

“My guitar’s in my car,” says Dustin, rising on the heels of his black Converse shoes. “You wanna – ”

“Okay, sure,” Amber smiles. “Just stay put while I’m in the bathroom.”