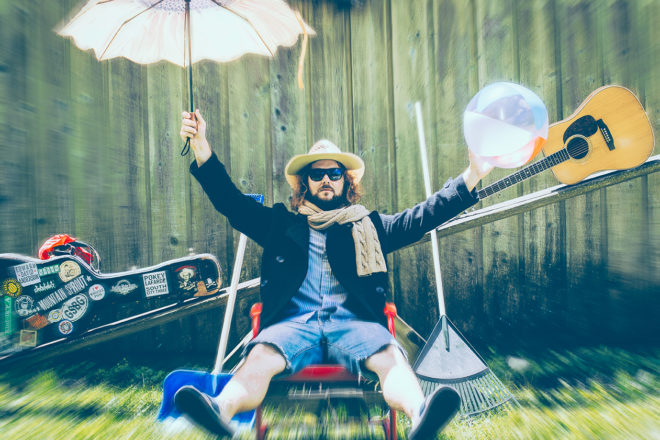 He sings about farming and skateboarding. He sings about meth and job loss. He sings about climate change, new used cars, and racism. Bloomington, Illinois singer/songwriter Chicago Farmer brings his American stories and protest songs to the stage in Sturgeon Bay at Martin Park’s Harmony by the Bay concert series July 26.

Born in the rural farming town of Delavan, Ill., Cody Diekhoff got his start in music writing poetry in study hall “to keep myself out of trouble,” eventually putting the poems to music.

His music making followed him on a winding path through many homes. He became a gifted storyteller over the years, and begins sets with a story of how he became a musician.

“When I was a much younger man, I started to do a lot of wandering,” Diekhoff said in a 2015 video of a set at Castle Theater in Bloomington, Ill. “I figured if I kept on wandering and kept on searching I would eventually find myself. I looked everywhere, and I couldn’t find me.”

Diekhoff found himself in Bloomington in 2000, less than an hour from where he grew up. Diekhoff and his audience came together in laughter and music when he called into work on stage over the microphone and told his boss he wouldn’t be making it for his shift, which started in 15 minutes. 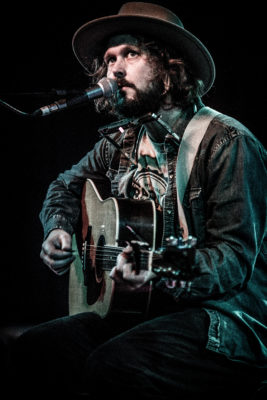 Cody Diekhoff, performing as Chicago Farmer, brings his songs for the everyman to Harmony by the Bay on July 26. Submitted.

“For the first time, we became us…and I like us a lot,” he said. “I realized in that moment what I wanted to be and what I wanted to do for the rest of my life. And that was to bring us together and be us all the time.”

Chicago Farmer’s mission as a musician was set. He’s been working on it ever since, with his seventh studio album released last October and an impressive tour schedule, touring almost constantly for more than seven years.

Home is still in Illinois for Diekhoff, though. He cites the upper Midwest culture and attitude as the guiding inspiration behind his music.

“I found out that the place I was looking for was right here at home, where I have my family and friends,” he said in a phone interview. “I didn’t realize how much I admired where I came from until I got a little bit older, because when I was younger I thought it was a little bit of a drag.”

With songs such as “Farms and Factories” and “9pm to 5” Diekhoff celebrates the honest and hard-working people he grew up with.

“Those people are kind of forgotten,” he said. “Working class heroes don’t get a lot of attention, I think. And so I bring them out into the forefront in my music…to shine a light on what they do every day to make the world go round.”

Championing the everyman is just part of his story. With witty criticism and commentary on issues not often given voice, Chicago Farmer connects himself through his lyrics to the spirit of the times and raises awareness about important issues. In “Homework,” he reminds everyone to do their part in saving the planet. “Rocco N’ Susie,” a ballad about the destruction methamphetamine use can wreak on a family, brings voice to stories difficult to hear, but that start a conversation about things that, according to Diekhoff, should be talked about more.

Despite all of the darkness, Diekhoff thinks there’s hope that prevails through it. The strong sense of community in the Midwest provides the necessary encouragement to keep our collective chin up and our collective legs moving us forward.

“We’ve been through tornadoes and addiction and politics but we’re still here and we’re still kicking…and I think that it’s important to say it’s not all negative, that there’s hope looking ahead.”

Chicago Farmer will perform at Martin Park’s Harmony by the Bay concert series July 26 from 7-9pm. Bring a blanket or lawn chair. In case of rain, the performance will be held at CenterPointe Marina, 77 S. First Ave. For more on Chicago Farmer, visit chicagofarmer.com.