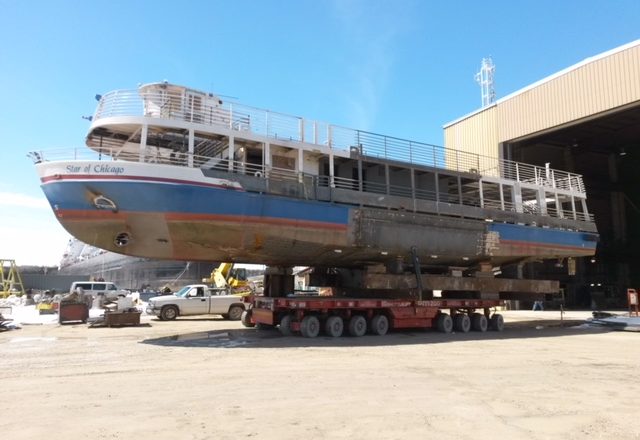 It was all-hands on deck to “stretch” three iconic Chicago tour boats at Fincantieri Bay Shipbuilding. The two-year long process from concept to sail, including efforts from other local firms, has renewed the Star fleet of Chicago’s Shoreline Sightseeing.

The Bright Star, the Evening Star and the Star of Chicago are going home during the next several weeks after getting lengthened to accommodate increased upper deck capacity.

Matt Collopy, vice president of Shoreline Sightseeing, said this was a complicated but needed endeavor in response to increased demand from a new dock on the river at Michigan Avenue. Shoreline’s goal was to stretch each boat more than 20 feet, not to increase total passenger capacity but to add seating to the upper deck so more customers had a good experience on the long-standing Chicago architectural river cruises.

The stretching is no simple matter with all electrical and piping systems needing to be reworked, requiring special design and engineering labor by Bay Shipbuilding personnel as well as services from local Seacraft Design. 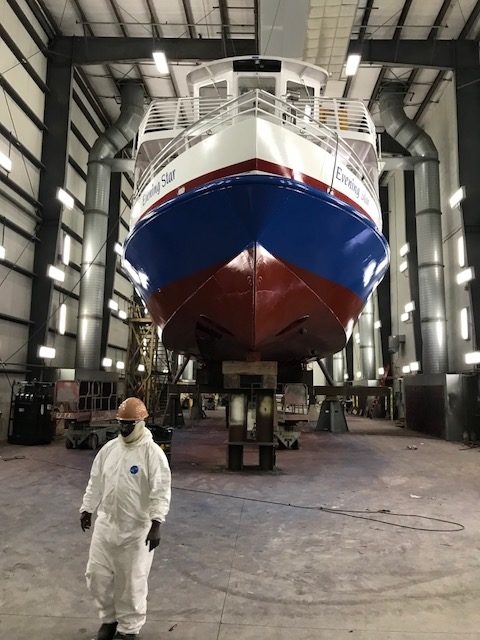 The process had the boats cut in half and new prefabricated center pieces hand-welded in place. Collopy also noted the additional work to increase operational efficiency including upgraded generators, power panels and vessel systems as well as a new steering system and larger water/sewer tanks. The boats are also fitted with upgraded handrails, lighting and speaker systems, then sandblasted and painted.

New canopy covers by Dorsal Sails and Canvas will top the new appearance of the boats. Cheryl Arnott, one of two Fincantieri project managers, indicated that this job was unique as it was as complicated as any reworking job but had different considerations for the smaller passenger-type vessels.

Arnott has been a project manager for four years and expressed how she and the crews enjoy the challenges of their work at Fincantieri as they service vessels ranging from small boats to 1,000-foot ships.

“All the trades here are very good…they have done an excellent job,” Collopy said. “I’m really impressed with everything. We have had a very good relationship with Bay Ship over the years.”

The Bright Star was built by Bay Shipbuilding in 2003 and will return to Chicago sporting its longer, sleek look this month.

The Evening Star, built by Bay Shipbuilding in 2001, will follow shortly thereafter. The Star of Chicago, constructed by a company in Rhode Island in 1999 – a different boat-building technology era – requires additional fitting work so will set sail for home in later May.