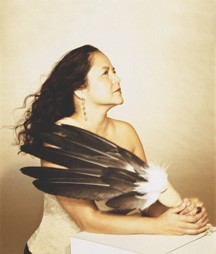 The first in a series of concerts to entertain, educate and inform the public of Native American culture are being coordinated by Coleen Bins, owner of Chief Oshkosh Native American Arts in Egg Harbor. The inaugural concert is slated for Aug. 17 from 7:30 to 9 pm and features Grammy Award-winning singer Joanne Shenandoah.

Shenandoah, Ph.D is a member of the New York Oneida Nation and a Grammy Award-winning singer. With over forty awards (thirteen for Native American Music) she has performed around the world, including at the White House, Carnegie Hall and Madison Square Gardens.

The original Chief Oshkosh Native American Arts building was constructed by the last of the hereditary Menominee Chiefs, Chief Roy J. Oshkosh. The Chief offered native dance performances by Owassie Dancers and told stories of native legends in a natural amphitheater behind the trading post.

Bins, a member of the Oneida Nation— Turtle Clan, wants to restore these traditions to Egg Harbor. “It’s been my dream to bring back these creative performances to this land and share our heritage and culture with the public,” she said. “In order to do that, I’m creating a series of performances that can help to rebuild the amphitheater. To launch the first concert, ticket prices will be held at $15 because I’m underwriting most of the costs for the performer, and then monies can go toward the restoration project and future performances.”