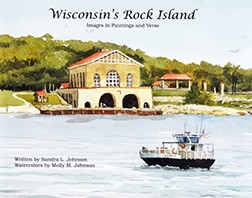 After years of visiting Rock Island for camping trips during the summer, retired Green Bay educator Sandra Johnson combined her love of the island, poetry, history, art and music to create her children’s book, Wisconsin’s Rock Island – Images in Paintings and Verse.

Although the book was published last summer, it is based on a poem Johnson wrote in 1989 about the state park. At the time, Johnson had taken a break from teaching to raise her daughter but her husband, then a history and archaeology teacher at Kaukauna High School, was team-teaching a class with a curriculum built around Rock Island State Park.

Naturally, Johnson was receiving updates on the curriculum and learning more about the island. She wrote the poem, “Rock Island,” while sitting next to a wood burning stove in her kitchen during a Wisconsin blizzard and shortly after, entered it into a state contest where, out of 219 poems, it was named eighth runner-up.

The poem details the sights of Rock Island through its history – its “West beach of stone, south beach of sand,” and pays tribute to the Potawatomi Indians, flora and fauna, and European settlers while also touching on some of the issues faced during the island’s history, like scarlet fever and pneumonia. 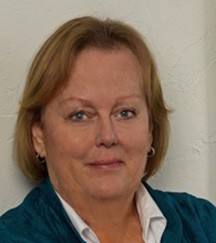 It sat on the backburner for many years until what Johnson calls the “perfect storm” for creating the book, including her retirement, poem and serving as a history re-enactor for the Tall Ship Festival in Green Bay.

“It ties into the role of tall ships, lighthouses and how they helped open up the Wisconsin territory,” Johnson said. “I took a look at the faces of children who came to the Tall Ship Festival in Green Bay. Kids are excited about this maritime history.

“I was motivated to take what I learned and what I knew and put it in a format that was readable and age-appropriate for kids,” she added. “It was intended to be used by young readers in order to focus in on this one part of our state.”

She built the book around her poem and found Denmark, Wisconsin-based artist Molly Johnson (no relation) to create watercolor images based on Johnson’s personal Rock Island photos to accompany the text. As a former teacher, Johnson also included four pages of hands-on activities that can incorporate into the classroom curriculum, from social studies and science to math and language arts.

This winter, Johnson made the decision to team up with Madison-based folk musician Tom Kastle to create a music CD based on her song, “Rock Island,” to include with the book. Kastle provides vocals, concertina and guitar on the album, with words and music by Johnson. The inside back cover of the book includes the CD and sheet music.

“Young readers and their families can learn the chronology of Rock Island with this sing-along song,” Johnson said. “If, at an early age, children learn important environmental concepts, they grow up to become citizens who support the funding, maintenance and preservation of our Wisconsin state park system.”

“People seem to like it as a great memory of the island,” Johnson said. “Photographs are terrific but this is something a little more unique because their kids or their grandkids are able to see this chronology. It’s not just a fact-filled document that kids can read. What I’m trying to do is make them care about this park.”