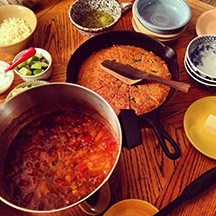 To bean, or not to bean,

That is the question.

Anyone who has been to a chili cook-off knows chili means many things to many people.

Some believe chili is really chili con carne, which is meat cooked in a sauce made of chiles. Period. Most, but not all, of those chili carnivores live in Texas.

Some see it as a tomato-based stew featuring meat and beans. Then there is vegetarian chili, sometimes with a meat analog, depending on the philosophy of the particular vegetarian making the chili.

After that you begin to enter fringe territory, such as those who believe it isn’t chili if it doesn’t have macaroni or spaghetti noodles in the mix. Some know it as Cincinnati Chili, and some know it simply as Chili Mac. Smilen’ Bob’s Chili at the Bayside in Fish Creek is a superior example of the style. 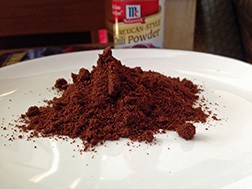 And on the very lunatic fringe of chilidom are those who believe there is something called “white chili,” using chicken as the meat, chicken stock in place of tomato, and mushy Great Northern beans in place of the texturally superior pinto and kidney beans.

How can one dish have so many interpretations? With its origins shrouded in history, the one thing that is known for certain is that chili is not a Mexican food. The 1959 Diccinario do Mejicanismos defined chili as “detestable food passing itself off as Mexican, sold in the U.S. from Texas to New York.”

Legend tells us that Catholic priests in 19th century southwestern America assumed chile peppers had aphrodisiacal qualities and warned against eating chili, the “soup of the devil.”

Texans put their stamp on chili in 1977 when Texas chili makers successfully lobbied the state legislature to proclaim chili the official state food of Texas “in recognition of the fact that the only real ‘bowl of red’ is that prepared by Texans.”

“The first thing, we consider chili is a meat dish with a good red-colored gravy and chili spices. It has no beans,” said Kris Hudspeth, public relations director for the Texas-based Chili Appreciation Society International (CASI). “We are quite simply a meat and gravy organization. That’s all the distinction for our cook-offs – meat and gravy and no fillers.”

“I pretty much cut my teeth at chili cook-offs,” he said. “The quickest way to get disqualified is to put beans, macaroni or rice in your chili. You can use just about anything else as far as fresh ingredients go, but nothing can be larger than the pieces of meat.”

For spices, Hudspeth said Texas contestants use chile powders rather than fresh chiles.

“We get a more consistent level of result than using fresh chiles,” he said.

And how does Texas feel about the abomination known as white chili? 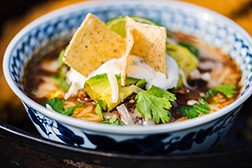 “Down here in Texas, white chili is not that common, even at restaurants,” he said.

“I am a chili fan. I eat a lot of chili. Actually, I go for no beans,” she said. “I love the toppings that go on it – the onions, cheese and sour cream. It’s been a good winter for chili.”

“There are no rules,” Woldt said, meaning that the chefs may present whatever interpretation of chili they believe in.

This is Woldt’s first year organizing the chili cook-off. She said the folks who used to do it didn’t have the time any more. A cook-off was not held last year, but Woldt decided to pick it up this year.

The Chili Cook-Off takes place at 5:30 pm in the Sturgeon Bay Middle School cafeteria, up until half-time of the boys’ varsity basketball game against Kewaunee (that game starts at 7:30 pm). Takeouts will be available. It’s $5 for all-you-can-eat chili.

“It is a fundraiser for Sturgeon Bay High School athletics,” Woldt said. “Every penny goes back into the booster club funds, where we help whichever teams needs help. It’s great for the student athletes, but it’s also a great way to highlight local businesses.” 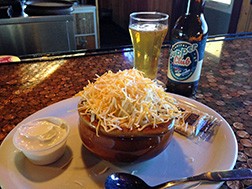 “We’re actually hoping to get a couple more. We’re waiting for a couple of responses,” Woldt said.

To avoid stacking the audience for votes, chili eaters will not know which business made which chili.

“They will know who the sponsors are, but they will not know which chili is specifically from Brick Lot or which one is from Casey’s,” Woldt said.

Chili eaters will then be asked to vote for best chili, spiciest chili and most unusual chili.

“Meat, beans and no noodles, that pretty much defines our chili,” said Wendi Carter, owner of Brick Lot Pub. “We have chili year round, it’s actually one of the things we’re known for. It’s different. It’s a sweet chili, rather than being spicy, so it appeals to a lot of different people.”

“As part of the deal, we actually negotiated the recipe with the purchase back in 2010,” Carter said. “They didn’t do a booster club chili cook-off last year, but the previous three years, we won two of the three years. We have a very popular chili here.”

Paul Salm of Cornerstone Pub in Baileys Harbor and Door County Fire Company in Sturgeon Bay has a philosophical take on chili.

“It’s an interesting topic because it comes up a lot in the restaurant business,” he said. “It’s like democracy. Each little chunk, we have to govern it through the chili-making process so every piece is correctly represented.”

He considers chili making as a bicameral system. When making chili at home, you are more like a member of the House of Representatives, representing a smaller, regional group of people.

“My chili might be outrageous. I can put potatoes in my chili. I love spicy chili, I love chili so spicy it takes you all afternoon to eat it, but from the restaurant aspect, I can’t serve that,” he said.

“The restaurant business is much more like the Senate,” Salm continued. “We’ve got more ingredients, but we have to remember that our constituency is huge, so our chili has to be digestible. That doesn’t mean it has to be boring. It has to have substance, but it has to be accepted by everyone. On top of that, people have to be able to easily manipulate it to where they want it to be. You can add any number of hot sauces, jalapenos, onions, sour cream. So the restaurant chili has got to be great, but it can’t be outrageous. That’s where you run into trouble.”

Since this is such a fiery and personal subject, I feel it necessary to end with a little ditty that describes my take on chili:

If they’re not in your chili

You should get the boot.