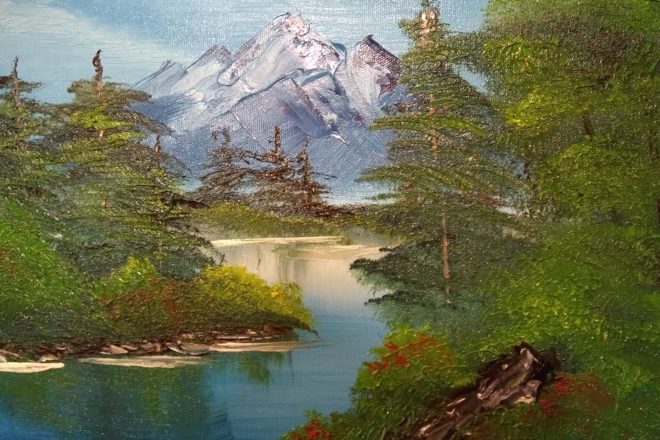 It’s amazing how a gentle soul with an afro can get you to leave behind your lifelong fear of failure.

“We don’t make mistakes. We just have happy accidents.”

These words, among the most famous of the late American painter Bob Ross, have had a home in my mind for many years. It wasn’t until I decided to pick up a paintbrush, though, that I fully realized how important that mantra is to pursuing creative endeavors.

Ross was the late, great host of PBS’s The Joy of Painting, an instructional TV show equally sought out by painters and those who wanted to fall asleep to Ross’s soothing vocals. Turns out we have the U.S. Air Force to thank for his laid-back speech. In 1981, after 20 years of service during which he rose to the rank of Master Sergeant, Ross retired with a vow.

“I was the guy who makes you scrub the latrine, the guy who makes you make your bed, the guy who screams at you for being late to work,” he said in a 1990 interview with the Orlando Sentinel. “The job requires you to be a mean, tough person. And I was fed up with it. I promised myself that if I ever got away from it, it wasn’t going to be that way any more.”

It was a vow he kept through more than 11 years of The Joy of Painting, a half-hour show during which viewers watched mountainscapes, seascapes and landscapes take form in Ross’s signature wet-on-wet technique. I recall watching snippets of it on TV when I was young but it wasn’t until a few years ago that Bob Ross reappeared in my life in – true to 21st century form – a meme.

Suddenly, I found myself in the highly quotable world of Bob Ross’s television painting studio and, much to my delight, so did my brother, David. A few years ago, he received a Bob Ross Master Paint Set, complete with oil paints, brushes, a palette knife and an instructional DVD in which Bob Ross teaches you how to make a beautiful mountain painting in 30 minutes. Last time I was at my brother’s house, he showed me his growing collection of Bob Ross-inspired landscape paintings. I was inspired.

Last Christmas, it was at the top of my list, but that didn’t stop me from cheering in excitement when I unwrapped a package to see Bob Ross’s cheerful, everything is a-okay face looking back at me. It took me a few weeks to gather the rest of the materials I needed – a palette, canvases purchased from Pulse artistic director Ryan Miller, and a portable easel borrowed from my friend Mikaela.

Finally, one March evening, I was ready to experience the joy of painting. As I laid down tarps in my living room, it suddenly dawned on me that I had never actually made a painting before. Random quotes from various Door County artist interviews came into my head:  “I hate oils.” “I don’t have the patience for oil painting!” “It’s so messy.” “It takes weeks to dry.”

It was messy and I understand why oils try people’s patience, but as I began tentatively applying paint to canvas, none of that mattered. I was doing something I’ve been writing about for years and it was with the encouragement and direction of the King of Zen. Everytime I began to get frustrated that it wasn’t turning out exactly like Bob Ross’s painting, I took a step back. Perfection wasn’t the point. I was painting my own world and in that world, crooked, happy trees hung out with their little friends.

I wasn’t trying to do anything but paint. If it looked awful, so be it. I had to remind myself of that, of course, but when your main tool is a paint brush whose handle is imprinted with a silhouette of Bob Ross’s face and hair, and you’re watching that man tell you everything’s going to be just fine, it’s easy to remember.

After two hours of painting (and wearing out the “pause” and “play” buttons on my remote), my mountain scene was complete. I refuse to look for its imperfections. I know they are there. I created them. But as I was reminded, and continue to be reminded as I look at my still-wet painting more than three weeks later: