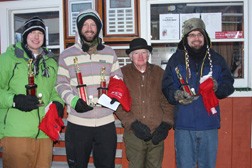 It was a cold day, with temperatures around 10 degrees, but the sun was shining for the Frostbite Open on New Year’s Day at the Red Putter Miniature Golf in Ephraim. Thirty-seven people played in this year’s tournament, with all but one person finishing both rounds.

Sister Bay resident and 2012 champion, Nickolas Kwaterski regained the championship with a score of 78. He received a trophy and $700 cash prize, plus a trophy for Best Single Game with a score of 37. Kwaterski was followed closely by some tough competitors: the 2013 champion Chris Hockers took home the second place trophy and Nicholas Havel came in third.

The Red Putter is now closed for the season, but will reopen May 1 and is looking forward to the next tournament, The Red Putter Pro Tournament on Aug. 2.