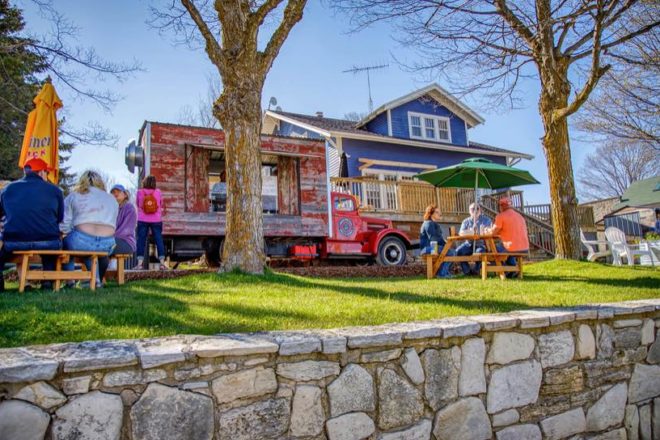 Chives has cultivated a progressive menu with distinctive ingredients and a relaxing, take-your-time approach to an evening out in its Baileys Harbor dining room. Last year, restrictions on indoor dining forced J.R. Schoenfeld – who owns both Chives and Barringer’s in Fish Creek – to reinvent the restaurants’ business models again and again.

One reinvention was to offer meal kits for customers to cook at home – gourmet grilling boxes for cookouts, for instance. Other pivots expanded outdoor seating options and highlighted food trucks. Although indoor dining will be available this year at half capacity, Schoenfeld is hopeful that his food trucks will continue to thrive.

“I believe I was one of the first ones in Door County that purchased and pushed food trucks in the area for about five years now,” Schoenfeld said, “and it’s been a hard sell, but last year COVID changed all that. I believe food trucks are going to be a big part of Door County dining now and in the future.”

Parked outside of Chives last year, Schoenfeld’s two food trucks were wildly popular, sometimes bringing in 500 people a day, he said. This year, one truck will sell wood-fired pizzas such as mushroom arugula, classic Margherita, and super pepperoni. The other features raw-bar shrimp, oysters and a hearty lobster roll on its menu, along with Schoenfeld’s favorite, the truffle burger.

“This burger is amazing,” he said, “with mushroom duxelles, truffle Gouda cheese, and arugula truffle aioli.”

Schoenfeld went on to express the importance of offering quality food and fast service.

“I really think it’s the future of Door County dining,” he said.

One addition to his food trucks this season is something he experienced while on a vacation to Disney World: contactless ordering through a QR code.

This year at both locations, diners need only snap a QR code, order food and beverages on their phones, sit outside and listen for their name to be called. Contactless ordering should cut down on time spent standing in line, leaving more time to relax at safe distances on the lawn.

Necessity is the mother of invention, and Schoenfeld hopes these innovations will make what may be an even busier season go smoothly.

“Last year we were all surprised at how busy the peninsula was,” he said, “but this year, with a new outlook and new ideas, I think it’s going to be a great season.”