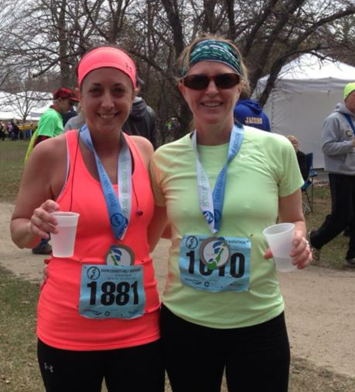 Christe Terrien (left) and Sheila Sanville celebrating at the finish of the 2014 Door County Half Marathon. It would be Sheila’s last race.

After the resident of Gladstone, Mich., lost her father to a heart attack when he was just 53, she decided she was going to live her life to the fullest. She tried roller derby, then started running 5ks, and eventually, half marathons, pulled in by a friend who wouldn’t let her say no.

Sheila Sanville was a strong-willed, stubborn wife and mother. “She’s the only redhead in our family,” her sister Cherie Granquist said, “I always blamed that for her feistiness.”

When she signed up for the 2014 Door County Half Marathon, she convinced Terrien to do it with her, and she wasn’t going to let the rough Upper Michigan winter give either of them an excuse to drop out.

“I started to tail off in my training,” Terrien said, “and she knew it. That’s when she started dragging me out to run with her a few days a week. She pulled me along.”

Sheila was a new runner, too. She ran track in high school, but hadn’t run seriously in 20 years when she told her sister she was going to take it up. “I said ‘you’re gonna do what?’” Granquist recalled. “But she found a program online and she went for it.”

It wasn’t the first time she had changed course to find a new obstacle to overcome. She had been a hairdresser in early adulthood, and a good one, but she wanted more. More money, yes, but more challenges too. So at age 26 she enrolled at Northern Michigan University to become a teacher, finishing at age 32 and getting a job at Big Bay de Noc School teaching computer science and accounting. 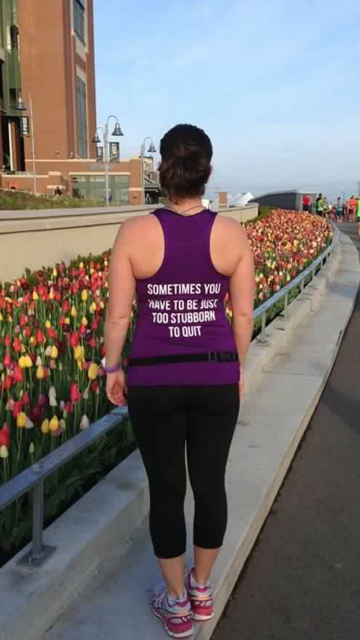 Christe Terrien had her friend’s pet saying printed on a tank top she wore in her first marathon. “Sometimes you have to be just too stubborn to quit.”

Sheila settled into life with her husband, her horse, and Brody, the son she doted on. “She loved going to his games – football, wrestling, baseball,” Granquist said. “Her schedule revolved around him and she loved it. Every Sunday we’d go to our parents for dinner.”

In 2011 she moved to North Central School, where Granquist works in the kitchen.

“I was so happy when she came to our school so I could see her every day,” Granquist said.

Sheila and Terrien’s training fell into place, and heading into the half marathon Terrien was feeling confident, but Sheila seemed off. “She was coughing a lot, all the time.”

She went to the doctor, who thought it could be acid reflux disease, maybe asthma, but the cough was bad enough that Granquist expressed her concern.

“Are you sure you should even run this thing,” she asked her sister.

Of course she would, and she started the race well. But as Terrien and Sheila made their way down Middle Road toward the beginning of the climb up Sven’s Bluff at mile 5, Sanville began to slow.

“She was struggling, not coughing or anything, just struggling to keep up,” Terrien remembered. “She told me to just go on without her, to run my race. She didn’t want to hold me back and she would have felt awful if she had.”

Terrien ran ahead as her coach told her, finishing in 2:08:32. Sanville regained her rhythm as well, crossing the line just six minutes later in 2:14:44.

“That was crushing,” Terrien said, “but I also thought, ‘wow, this woman just ran a half marathon with lung cancer!”

In her typical fashion, Sheila rallied to fight her disease. Her stubborn streak took over and she created a plan. “I’m going to beat it, and when I do, I’m going to go back to Door County and run the half marathon again, this time healthy,” she vowed to Terrien.

“My mom moved in with my sister to help clean, help with her son,” Granquist said. “Christe and other friends would come by to bring her food, give us a break, help with anything my sister asked for. Terrien was there a lot.”

Terrien signed up for the Cellcom Green Bay Marathon, breaking it down in her mind into two half marathons – one for herself, and one for Sanville. But in a busy, difficult winter and spring, she couldn’t keep up with her training, and as the race approached her longest training run was just eight miles.

“We told her not to run, that there’s no way she should do that with so few miles,” said her friend Jessie Makosky. But Terrien summoned a strong dose of Sheila’s stubborn streak and would not bow out. She lined up in front of Lambeau Field in May of 2015 wearing a purple tank top bearing the phrase Sanville had told her during training for her first half marathon: “Sometimes, you have to be just too stubborn to quit.”

As she ran, runners approaching from behind would often read the phrase aloud, as though Sheila were running alongside her, urging her on.

“Every time it got tough, I heard her voice,” Terrien said.

“I miss talking to her, watching her son play sports with her,” Granquist said, choking back tears. “She was so proud of her son. I look at him and I know she would be so happy with what a nice young man he turned out to be. My one wish is that she could have saw him grow up.”

On May 7, Christe Terrien will return to Peninsula State Park to run the Door County Half Marathon, this time to fulfill the vow of a friend who never got that chance.