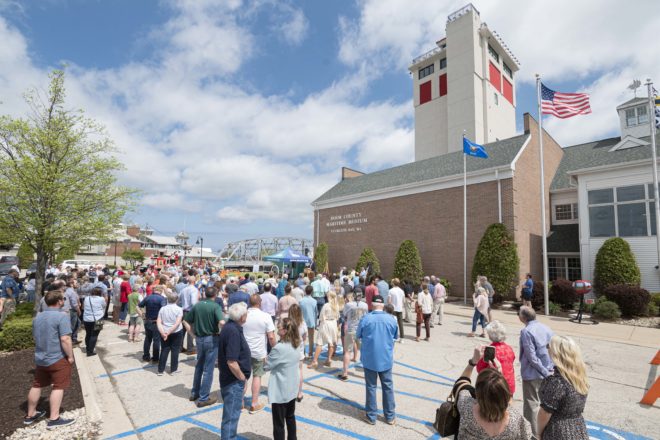 A crowd gathers in the parking lot of the Door County Maritime Museum on May 22 to christen the lighthouse tower, in the background, following its completion. Photo by Katie Sikora.

Following maritime custom, a selected volunteer announced the christening of the new Door County Maritime Museum (DCMM) Jim Kress Maritime Lighthouse Tower by smashing a bottle of champagne against the wall where the tower’s first stone was laid.

The May 22 christening event drew a large crowd to the parking lot at the base of the 118-foot, 10-story tower. It’s the tallest building in Door County and the fifth tallest in northeastern Wisconsin.

“One thing I learned from all my years working at the museum is people don’t really understand Sturgeon Bay’s maritime role,” said Jon Gast, a former executive director of the museum. “They still think this is a river here.”

An elevator to the rooftop Baumgartner Observation Deck proves the water is not a river. The panoramic view displays the Great Lakes setting for Sturgeon Bay’s maritime history. Then the chapters of that heritage story will be brought to life on each of the tower’s floors through interactive, educational exhibits that will be designed, fabricated and installed by Southern Custom Exhibits.

This is why the tower was built: not to warn mariners of dangerous shallows and perilous rocky coasts, but because the museum had accumulated more stories than it had room to tell, said Terry Connelly, president of the DCMM board of directors. With the tower’s location on the West Waterfront, the only way to go was up.

Connelly credited people such as Dan Austad, Jon Gast, Thomas “Cap” Wulf and John Roen Asher for having the vision to create the tower. That vision began shortly after the museum was built in 1997. Prior to that, it was housed in the old Roen Steamship offices of Asher’s grandfather, Capt. John Roen.

“We got that built, and we were trying to figure out how to get an icon here – something that would bring more people to the museum, more to the community, more to Door County,” Asher said.

Wulf recalled that he and Asher proposed the idea of a lighthouse tower at a board of directors retreat 20 years ago. They knew the allure of lighthouses because Cana Island Lighthouse, owned by Door County but operated by the DCMM, was the museum’s biggest attraction. They wanted a year-round attraction that would give the museum more self-sufficiency and less reliance on fundraising.

Although the vision started with a handful of people, the generosity of hundreds created the tower. More than 400 individual, family, corporate and foundation donors have contributed $5.8 million to the tower’s $7.2 million construction capital campaign, including a $250,000 Community Development Investment Grant from the Wisconsin Economic Development Corporation, and $1 million from the George F. Kress Foundation.

Will Kress, president of Green Bay Packaging and grandson of the family patriarch, George F. Kress, who founded the company, said the foundation’s donation was a tribute to his father, James “Jim” Kress, who died in 2019. Jim Kress was a lifelong mariner who sailed until the last years of his life.

“My dad would have loved this place,” Will Kress said during the christening ceremony.

The original fundraising goal was $5.5 million. Costs rose significantly courtesy of a number of circumstances, among them a major upgrade to the HVAC system that will allow the museum to apply for accreditation from the American Alliance of Museums and the Smithsonian Institution.

Snowfall marked the tower’s official groundbreaking on Nov. 13, 2019, but the temperature on the day of the christening soared above 80 F. At noon, after the speeches and the smashing of the bottle of bubbly, the tugboat John Purves – which was built in 1919, served the U.S. Army during World War II and later sailed on the Great Lakes – blasted its whistle several times in honor of U.S. National Maritime Day.

The scene was bucolic in its waterfront way, though much work has yet to be done. A construction fundraising gap of $1.4 million remains. And the exhibits will cost about $2 million, $600,000 of which has been raised to date, said Kevin Osgood, DCMM executive director. The first of those exhibits is supposed to be installed by October 2021, and the remainder by May 2022. A grand opening will signal the final exhibit installation. All of it will then fully tie together the story of Sturgeon Bay’s maritime history.

“It’s spectacular,” Asher said. “It’s everything we were hoping it would be, probably, and more.”