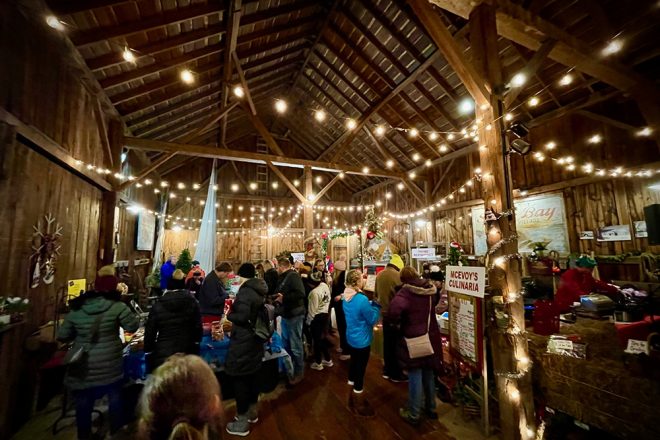 The first Christkindlemarkt opened at Corner of the Past Museum in Sister Bay Nov. 26. Photo by Myles Dannhausen Jr.

As you walked around the hedge of evergreens on an icy Country Lane, the twinkle of Christmas lights lit the otherwise dark rural road. Santa sat in the glow of his sleigh on the corner, and a boy in a pom hat piloted younger siblings on a kicksled across the snow-covered grounds, finishing his run at the foot of a firepit where a family warmed their feet and drank hot chocolate.

If this sounds like a scene in a Norman Rockwell painting, then you’re getting the right picture. But this painting was in Sister Bay at the Corner of the Past Museum, and the scene was very much alive during the first Christkindlmarkt – put on in stunningly successful fashion by the Sister Bay Historical Society.

An estimated 3,000 people or more people visited the market during its opening weekend, taking in a Door County version of the widespread European tradition. Even my brother – a harsh judge who was in town from Belgium with his wife and young daughter – was impressed.

“This is amazing,” he said as we walked the grounds. “Way better than I would have expected.”

And it was. The historical huts of the museum – painstakingly moved and preserved over two decades – were given new life as small storefronts for vendors. Spread throughout the huts, barns and tents were 30 artisans, activity areas, alpacas and food vendors. Visitors chugged 160 gallons of Glögg, plates full of kielbasa, and plenty of beer and potato soup.

The lead organizer, John Nelson, said the expectations were simple: “We didn’t know anything,” he said. He hoped that at the very least, they wouldn’t lose their shirts.

Well, after week one, it appears their shirts are safe, and the volunteers of the Sister Bay Historical Society may have created a great new awareness event and fundraiser for themselves. (I almost wrote “found themselves a great new event,” but events of this scale and quality are never just found.) Somewhere, David Lee – the man who saved this corner and launched the preservation ethic of Sister Bay Historical Society – was smiling.

Nelson said many vendors told him they had their best days in business, and the reaction from visitors was overwhelmingly positive.

“It took a year of planning, and a marketing grant from the Wisconsin Department of Tourism really allowed us to market on a statewide level,” Nelson said.

The event will continue the next two weekends – Dec. 3-5 and Dec. 10-12 – but the hours will shorten slightly: Friday and Saturday, 11 am – 7 pm; and Sunday, 11 am – 3 pm. A shuttle will run from the old Shopko parking lot because there is limited parking available on the roads near the market.