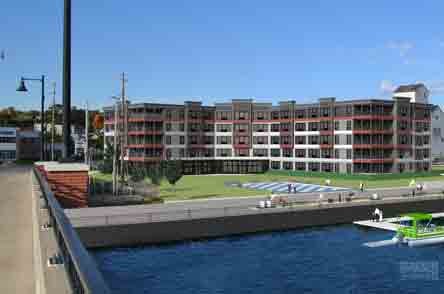 The recently formed Friends of the Sturgeon Bay Public Waterfront has collected more than $41,000 in an estimated $80,000 needed to pursue a lawsuit with the City of Sturgeon Bay regarding the hotel planned for the West Waterfront Redevelopment project.

“We are actively looking for 39 additional champions to step forward and pledge $1,000 each in the next 14 days,” an Aug. 27 release from the Friends group stated.

The statement also said the fund was created “to defend Midwest Environmental Advocates’ (MEA) assertion that the proposed Lindgren Hotel, a private enterprise on Sturgeon Bay’s Westside Waterfront, is being built on land that legally belongs to the public.”

Sturgeon Bay’s west waterfront has been the subject of controversy since a redevelopment plan was released in 2012. Photo by Tom Groenfeldt.

The Madison-based Midwest Environmental Advocates issued a letter in May to two attorneys with the Wisconsin Department of Natural Resources, maintaining that much of the proposed hotel would be built on filled lakebed.

“We believe this evidence incontrovertibly shows that a significant portion of the lands underlying the hotel building footprint were submerged lakebed at the time of Statehood. The City’s proposed conveyance of these lands for private development would clearly violate the Public Trust Doctrine,” said the letter signed by MEA attorney Sarah Williams.

“We’re so pleased because I think having raised this kind of money in such a short period of time has really made an impact on the community,” said Friends member Kathleen Finnerty. “We haven’t had the feeling that the city government wanted to engage with us. We felt like they would like to see us go away and that we represented a really small group of people representing the overall population. But that’s so not true. I think raising this kind of money shows them we are serious and we’re not going away. This is important not only for the city but it sets precedent on a statewide basis. This is a constitutional law. They city doesn’t get to pick and choose which part of the constitution it follows.” 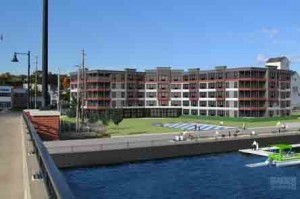 A rendering of the hotel with the planned public space along the waterfront.

Finnerty said the group hopes to file the suit to stop the hotel project, but she added that Sturgeon Bay Mayor Thad Birmingham has indicated he would prefer to talk the issue out with the group rather than involve the city in a lawsuit.

“If we can get into a talking stage and feel we’re having an impact and being listened to and find we have some common ground, wouldn’t that be great?” Finnerty said. “The other aspect that is interesting, we don’t really have a leader. All of us are on the same level, so a conversation with us means with a lot of people.”

Sturgeon Bay Community Development Director Marty Olejniczak said hotel developer Bob Papke would like to start turning dirt soon, however there are still several hurdles, including approval from the Wisconsin Department of Natural Resources because the site is within a DNR environmental program and in a filled area.

“There are several documents that had to be submitted to the DNR and several issues that the DNR is working through,” Olejniczak said. “Examples include plans for dealing with disturbed soil during construction, handling the methane that exists within the soil, plans for capping the site with clean fill, etc. The DNR staff is currently reviewing the latest info and they have estimated that the formal review letter will be issued early next week.”

He pointed out that the city council also required the final unconditional letter of financing from the bank be issued and approved by the council, and he expects that to happen once construction approval is received from the DNR.

“It is difficult to predict an exact start date,” Olejniczak said. “The week of the 14th would be the very earliest that I think it could start and could be a week or two later. There are so many factors that could delay it.”