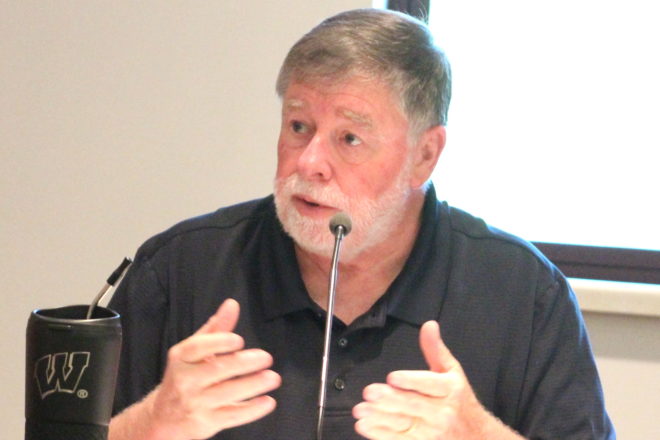 Sturgeon Bay’s Professional Police Officers’ Union is under contract through the end of 2025 following the Sturgeon Bay Common Council’s approval July 5 of a new, three-year agreement. It includes 4% wage increases for 2023 and 2024, and a 3% wage hike for 2025.

For next year, the contract sets the hourly wage for a first-year police officer at $30.79. The hourly wage increases for officers in their second, third and fourth years, with the latter to receive $34.77. An investigator or forensic analyst will receive $36.16 per hour, which is 4% higher than a fourth-year officer, and a sergeant will receive $37.24 per hour.

City Administrator Josh VanLieshout said he was part of the city’s bargaining team, which met twice with police-union representatives to reach the new agreement.

“The total time bargaining was probably between six and seven hours, if that much,” he said. “Bargaining went very, very well. I have to commend the WPPA [Wisconsin Professional Police Association]. They’re prepared and ready to sit down and go through their concerns in the contract and make a proposal. That was very helpful in the process. It doesn’t always go that way.”

In the event an officer would run out of allocated sick leave, VanLieshout said the city will continue to offer a donation program in which other officers could donate their sick time to that officer.

“We know that some diseases can easily use all of the available sick leave that a person might accumulate in their bank,” he said.

VanLieshout also said that a new feature in the contract is a limit on compensatory time to 96 hours in a year.

“Lastly, in the negotiation of the contract, the police union agreed to eliminate the longevity pay that was part of the contract previously,” he said.

VanLieshout said he believes that overall, the new agreement is a good contract.

“I think the city is treating the bargaining-unit employees fairly, especially given the current environment, and I think the city is being treated fairly as well,” he said. “There’s a lot of uncertainty – inflation as it is today, health care costs and things like that.”

VanLieshout said the police union ratified the contract prior to the council approving it.

District 3 Alder Dan Williams, who chairs the city’s Personnel Committee, said that reaching a new agreement with the police union was a “good negotiation process.”

In a related motion, the council approved a memorandum of understanding (MOU) for the lateral entry of police officers with prior experience.

VanLieshout said the city hasn’t had a problem in recent years being able to recruit and retain officers, but the hiring environment is subject to change in the future.

“Other departments, sometimes, face that challenge, and finding that seasoned talent, or that experienced staff, can be a real challenge, especially when an employee may have to come in at the bottom, [such as having] the least amount of rank, the least amount of pay, no vacation, no accumulated sick leave and so forth,” he said.

VanLieshout said he and the police department’s command staff “felt it would be in the city’s best interest to allow command staff to make lateral-entry decisions.”

Under the MOU, VanLieshout said the police chief will have the authority to bring in a new employee with years of experience or a specialized skill set at a level above the entry-level salary and benefits.

“We had something similar in the [police union] contract,” he said. “It was a little more wordy and a little less clear. This makes it better and clarifies that objective. Ultimately, I think it’s a good tool for the city. I don’t think there’s any harm to the city.”

The council approved another Personnel Committee recommendation to increase the hourly wage range for community service officers (CSOs) to $17-19, effective immediately, with no budget impact for 2022. The starting wage for CSOs was $17 per hour, with an increase of 50 cents for each year they return.

Williams said the purpose of the increase is to attract and retain CSOs, who often don’t return for a second year because they get hired elsewhere as full-time employees.

“We just thought that this made a lot of sense to, again, stay on the front edge of these things,” he said.

Williams said hiring employees is “becoming a bidding game out there, and [the] highest bidder wins.”

He said the hours for CSOs will be adjusted for the rest of the year to not exceed the budgeted amount.

An executive summary for the position states the duties of CSOs – who are either graduates of a criminal-justice program or enrolled, and who aspire to be law-enforcement professionals – include enforcing code violations and assisting patrol officers with traffic control at accident scenes and locating offenders.

CSOs operate a marked car and wear a uniform in performing their duties.