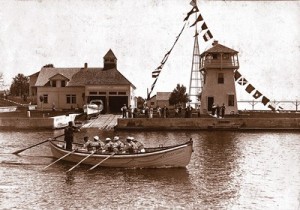 City Administrator Steve McNeil can pinpoint the day that led to Sturgeon Bay being named one of 16 Coast Guard cities in the nation.

“On Nov 6, 2009, there was a lunch attended by myself, John Asher (president of Roen Salvage Co.), Bill Chaudoir (executive director of the Door County Economic Development Corp.), and Bob Desh (executive director of the Door County Maritime Museum and former member of the Coast Guard who once served in Sturgeon Bay),” McNeil said. “We sat down and talked about the Coast Guard. What we wanted to do is talk about what all we could and should be doing for our Coast Guard families. That’s when it started.”

From that initial discussion, a volunteer committee was formed that continues to meet the first Wednesday of each month to discuss ways to make the area welcoming to members of the Coast Guard.

Since then the city celebrates Maritime Week near the Aug. 4 Coast Guard birthday. The celebration includes a concert dedicated to the Coast Guard. There is an annual dinner at the Sturgeon Bay Yacht Club where both the Cost Guardsman and Mariner of the Year are named. There is a Coast Guard golf tournament, and an annual picnic for Coast Guard members and their families.

All of these things added up to Sturgeon Bay being named a Coast Guard city, one of only 16 in the nation and the only one in Wisconsin, a fact that will be celebrated May 10 – 11.

A host of dignitaries will be on hand to share in the festivities, including Lieutenant Governor Rebecca Kleefisch, Congressman Reid Ribble and Rear Admiral Fred Midgette, senior commander for all Coast Guard operations throughout the Great Lakes and Saint Lawrence Seaway.

They will gather May 10 in Sawyer Park to formally honor the City of Sturgeon Bay on its recent designation as a Coast Guard City. The entire community is invited and encouraged to join in the celebration, which begins at 10:30 am with patriotic music, followed by the official proclamation ceremony at 11. A community family picnic hosted by the Sturgeon Bay Fire Department and volunteers from Bay View Lutheran Church will follow.

In addition to displays of Coast Guard boats and equipment, demonstrations, children’s games and jump house, a fly-over and search and rescue demonstration by an MH-65C helicopter from Coast Guard Air Station Traverse City is planned. The H-65 will later land next to Sawyer Park for display, viewing and an opportunity to meet the crew.

All events will take place in or near the Sawyer Park Pavilion at 36 S. Neenah Ave. on Sturgeon Bay’s west side adjacent to the Maple-Oregon St. Bridge. In the event of inclement weather, the celebration and picnic will be moved to the Sturgeon Bay Fire Station/City Hall at 421 Michigan St.

The festivities continue the next morning with a Mother’s Day Community Breakfast at the Fire Station at 421 Michigan St. from 8 to 11 am. Enjoy a breakfast of pancakes, scrambled eggs, Door County cherries, fresh fruit, sausage and beverages for $5. All mothers, Coast Guard families, and children 3-years of age and below are free of charge. All mothers will also receive a complimentary flower.

“All we did is what a good city should do,” McNeil said.