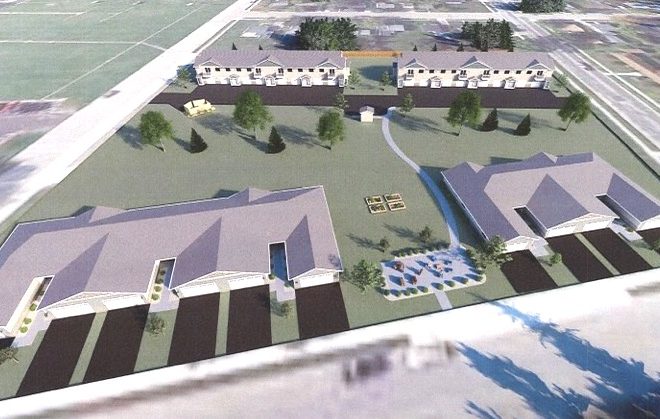 In anticipation of additional expenses that S.C. Swiderski will incur to redevelop the former Sunset School property with four apartment buildings having 26 total units, the Sturgeon Bay Common Council agreed July 19 to amend its development agreement with the company.

The amendment increases the limit on the amount of liens or debt applied to the property from $2.5 million to $4.54 million and identifies the Limited Liability Company (LLC) for the project as SCS Sunset Estates, for which the ownership is identical to S.C. Swiderski.

Marty Olejniczak, community development director, said that $2.5 million is the minimum assessed value the company is supposed to create with the apartment project, but construction costs are becoming “a lot higher” than that amount to complete the work since the company first developed its plans a year ago.

“In fact, they’re wanting to take out a construction loan of $4.54 million, so they want that amount raised,” he said.

Olejniczak said the amendment will have no fiscal impact on the city, and the developer is still required to build a development with a minimum assessed value of at least $2.5 million.

“They should have no problem hitting that mark,” he said.

Jacqui McElroy, S.C. Swiderski’s director of business development, said demolition of the school building is scheduled to take place this summer to make way for the new apartment buildings, for which construction would begin in the fall.

“Each building will open as it is completed, with all four buildings scheduled to open by summer 2023,” she said.

S.C. Swiderski previously received approval from the city for a planned-unit development and site plan calling for two two-story, eight-unit buildings with attached garages between Delaware Street and Erie Street, as well as four- and six-unit attached buildings along North 8th Avenue.

Plans the company submitted for the development include two different building types, along with a community area and two entryways. The 26 units will offer two- and three-bedroom options with six different floor plans.

Several weeks of work took place this year when a detour was in place to make improvements along Michigan Street, primarily from 12th to 18th Avenues, where a new blacktop surface is now in place.

Mayor David Ward said city engineer Chad Shefchik applied for and was able to secure a $240,000 state grant toward a project that will cost roughly $520,000 to improve Michigan Street next year from 4th to 12th Avenues.

“Get ready for your next set of detours,” Ward said. “At least you can get around that one a little easier than the other one we did this year. Thanks again for Chad and his diligence on that.”

Shefchik said the work planned for 2022 would be similar to what occurred this year, such as with paving, curbing and gas-line installation.