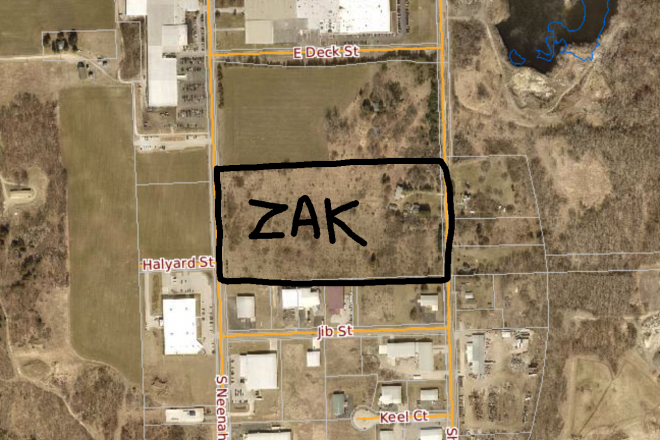 Plus: Incentives finalized for housing developer

The City of Sturgeon Bay purchased the 19-acre Zak property at 1317 Shiloh Road for $580,000 at the end of July to allow for expansion of the Sturgeon Bay Industrial Park.

“The purchase of this is important because we’ve run out of space in the industrial park,” said Mayor David Ward.

Also located on the property is a well-cared-for home, cottage and several outbuildings, including a former dairy barn in good condition, all on private water and septic.

“A lot of the purchase price had to do with the value of that home,” said Marty Olejniczak, Sturgeon Bay’s community development director, “so to recoup some of the investment seems to be a good plan, and develop the rest of the property for future industrial-park needs.”

To recoup some of the investment and help a little with the single-family-housing shortage, the Sturgeon Bay Finance Committee recommended the city share the listing with the Door County Economic Development Corporation and Destination Sturgeon Bay for two weeks, and if a “committed cash offer is not received,” to obtain an assessment and list the property with a real estate agent.

The “ideal purchaser,” according to Josh VanLieshout, city administrator, “would be a manufacturer or other business who will be tolerant of future development or perhaps who can use the home as a means of providing transitional housing for professionals moving to Sturgeon Bay.”

Everything along both Neenah Avenue and Shiloh Road in Sturgeon Bay is zoned industrial. The city has tried unsuccessfully to buy the 18-acre Munch family property south of East Deck Street and north of the former Zak property.

“We always called that a hole in our industrial park,” Olejniczak said.

Now that the city has decided to sell the former Zak home and buildings, Olejniczak said he didn’t know whether they’d rezone the approximately two acres that would go with the home and outbuildings.

“It’s zoned industrial now, so that’s a nonconforming use,” he said. “We could just rezone that little two acres. I don’t think that would cause major heartburn. But we don’t have to.”

The Sturgeon Bay Common Council approved a development agreement with S.C. Swiderski, the development firm that’s planning to take down the shuttered Sunset School and construct a 26-unit apartment building in its place. The council approved the general parameters in July and the final agreement Tuesday night.

The agreement calls for the city to cover the costs of demolishing the school building and provide a financial incentive of $7,700 per unit, for a total $200,200, payable upon completion of the 26 units.

The city created a Tax Increment Financing District (TID) in August – its fifth – to cover the city’s financial incentives.

The developer’s obligations are to build an apartment complex worth $2.5 million. If the property’s market value falls below that, the developer would need to make up the shortfall with payments in lieu of taxes.

The developer is purchasing the site for $1 from the Sturgeon Bay School District. During the due-diligence process for that transfer, the city learned that it had the right of first refusal to buy the property. The option dates back to the 1980s, when the city owned the school district buildings. When the school district took ownership of its buildings, the city held on to the right of first refusal.

In other business, the Common Council made the following decisions.

On Sturgeon Bay’s east side – next to the Sturgeon Bay Yacht Club and the new Bay Marine development – some old pilings remain in the water.

“Some of the pilings are above the water, some below,” Alder Helen Bacon said.

The pilings are a hazard for navigation, Alder Gary Nault said, and for sail-training instructors, Alder Spencer Gustafson added.

“I’ve received a lot of comments,” Gustafson said, “so it’s good to get these out.”

The city awarded a bid in March to Death’s Door Marine to remove the pilings for $36,425. The bid was based on removing approximately 50 pilings, but in September, the contractor discovered there were 71. By using the unit price per piling, that increased the cost by $13,965, and it put the project over budget by $10,980. The council recommended transferring the additional money from a contingency account to cover the costs.

Another shoreline-protection project will be done, this one along Juniper Street. The Sturgeon Bay Common Council awarded a bid of $31,378 to Bissen Asphalt to do the work.

“We shored up the shoreline, including Sunset Park and Bayview Park and the railroad spur and finished Otumba Park,” Alder Helen Bacon said. “We have one section left, and it’s at the foot of Juniper Street.”

The eight bids received ranged in price from Bissen’s low bid to $86,450. Steve Parent of Baudhuin Engineering sent out the request for proposals, opened the bids and reviewed them for accuracy before recommending Bissen for the award.