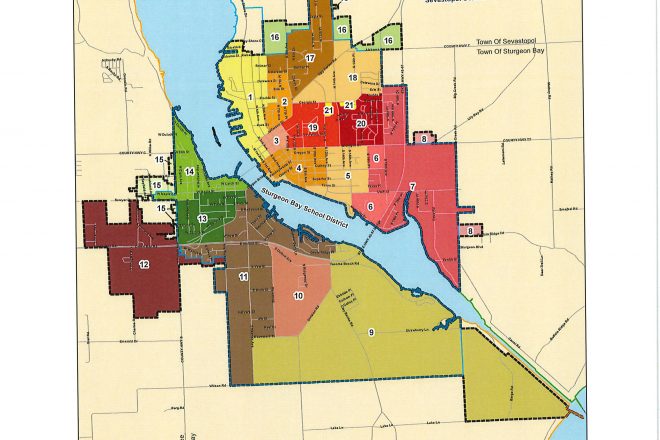 Land annexations during the past decade are driving the changes

The local redistricting process that follows the 2020 census continues to roll along.

Individual municipalities have drawn their own ward lines, which define where people vote within the new districts created by the County of Door. Those ward maps have been returned to the county, and final maps are being drafted and became available Oct. 21.

The Door County Board of Supervisors will hold a public hearing on the final maps Tuesday, Nov. 9, 9 am.

Within the City of Sturgeon Bay, the number of wards has dropped from 30 to 21. The city’s population grew by 502 people during the past decade, but so did the city’s land mass.

“The main reason that the number of wards was reduced is due to annexations over the last 10 years, and we were able to clean some wards up by combining them with the same ‘type’ of wards,” such as school districts, for example, said City Clerk Stephanie Reinhardt by email. “So in essence, it cleaned up the wards.”

“If there is a school district boundary change or an annexation, many times it requires the creation of a new ward,” said Ken Pabich, Door County administrator, by email. “With this process, you are now able to take these small wards and combine them.”

The mapmaking process, called redistricting, is conducted every 10 years following the U.S. Census. The lines drawn are then in place for the next decade. The Wisconsin Legislature creates the Assembly, Senate and congressional districts. Counties create their own districts, and towns, villages and cities create their own wards.