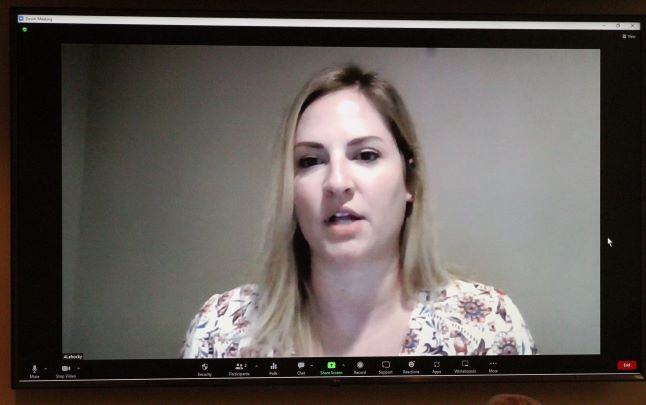 Attorney Ashley Lehocky of Town Counsel Law and Litigation appears Tuesday via Zoom before the Sturgeon Bay Common Council to discuss a mediated settlement the law firm reached on behalf of the city with Walmart over the company disputing the assessed values of three parcels it owns along Egg Harbor Road. Photo by Kevin Boneske.

After meeting in closed session for about 30 minutes Tuesday, the Sturgeon Bay Common Council approved a settlement agreement with Walmart to resolve a dispute the company had with the city over its assessment of three parcels along Egg Harbor Road for property-tax years 2021 and 2022.

Walmart claimed the parcels were worth no more than $4.45 million, but they were being assessed for $7.65 million.

The council voted unanimously to settle upon reconvening in open session, but with “reluctant ‘yes’ votes,” Ward said.

When asked why the council approved the settlement instead of continuing to contest the matter, he said the agreement reaches an assessment amount closer to the city’s value than what Walmart claimed, and the amount could have been reduced further had the city fought the assessment in court and lost.

City Administrator Josh VanLieshout said the council deliberated about a number of things while in closed session, including the process of litigation and whether the city could do better in litigation than it could through mediation.

“Recognizing that oftentimes in these cases, it’s not a winner-takes-all approach,” he said.

VanLieshout said the settlement gives the city control in the decision-making process for setting the assessed values for the parcels, versus litigation, in which those values would be decided in court.

The city was represented in the matter by Town Counsel Law & Litigation, a law firm based in Kaukauna.

Prior to the council going into closed session, attorney Ashley Lehocky from the law firm appeared via Zoom during the council’s meeting to discuss reaching a settlement through mediation ordered by Door County Judge D. Todd Ehlers.

“It was Walmart’s position at that time that the parties might be able to mediate this case,” she said.

Lehocky said she believed at this point in the case there was “no further chance for negotiation. Both sides are sort of at their take-it-or-leave-it number.”

In the complaint filed in Door County Circuit Court on behalf of Walmart for the 2021 tax year, the company alleged that the assessment violated the uniformity clause of the Wisconsin Constitution because its assessment was “not uniform with the assessment of other properties in the city and state.”

Throughout Wisconsin, commercial retailers have used that legal argument to try to lower property-tax assessments with what’s known as the “dark-store loophole,” in which they claim their properties are worth the same or close to the lower value of similar, but empty buildings.

Though Walmart sought a refund on the portion of property taxes it claimed were excessive, plus interest, Ward said the settlement waives the interest payment.

Upon reducing an assessment by $1 million, Ward said the city would need to refund about $8,000 for its share of the overall property taxes, for which around $22,000 in property taxes would be levied overall.

This is not the first time Walmart has contested its assessment with the city. Court records indicate the city reached a settlement with the company on two previous occasions for Walmart’s Sturgeon Bay store.

“This isn’t Walmart’s first go,” VanLieshout said. “This is part of a national strategy. You see this from national retailers all the time.”