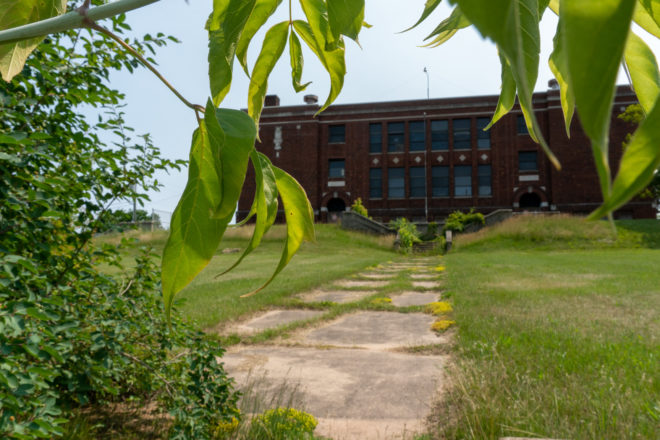 The abandoned and historical West Side School building, aka the Sawyer School, will be renovated for reuse as a 15-unit apartment complex. Construction is expected to be underway in August. Photos by Rachel Lukas.

The Sturgeon Bay Common Council and Plan Commission have been working through the development process for four housing projects that will put the city on track to add 104 new rental units by 2023.

Details of the four housing projects are listed below.

This project will convert the long-vacant, historical Sawyer School building into apartments. The developer secured a conditional use permit (CUP) in January from the city’s Plan Commission. The land was already zoned for multifamily residences, but city code required a CUP for buildings with more than eight units.

This is the developer’s second attempt to convert the structure into housing. The first one failed when low-income tax credits weren’t granted to help finance the construction. The project was resurrected when Door County government officials agreed to contribute Community Development Block Grant funding of $1,447,132, which must be spent on an affordable-housing project.

Developer: Northpointe Development in Oshkosh, the same developer proposing a 53-unit apartment building on the West Waterfront
Number of units/style: 15 apartments (seven one-bedrooms, seven two-bedrooms, one studio)
Rental rates: Both affordable and market rates. One-bedrooms would be either $640 or $1,000, and two bedrooms $770 or $1,200. The lower rates would apply to those making 50% or less of the city’s median income.
Status/what’s next: The project is fully approved by the city, but the developer is seeking final approval from the Sturgeon Bay Historic Preservation Commission. That’s expected to happen this month.
Target construction start: Northpointe developer Andy Dumke said last week that they anticipate finishing up site prep in July and starting construction in August. The project is expected to take nine months to complete.

The city requested development proposals in 2020 for this city-owned parcel and selected the developer in December. The taxable value of the project has been estimated at $6.5 million.

Developer: Northpointe Development in Oshkosh, the same developer converting the historical West Side School building into apartments
Number of units/style: Five-story (parking on the bottom, with four floors of apartments), 53-unit apartment building (32 one-bedrooms, 21 two-bedrooms)
Rental rates: Market rates, from $1,200 to $1,500 monthly
Status/what’s next: The Plan Commission and Common Council have granted conceptual and preliminary approvals of the Planned Unit Development (PUD), based on the condition that none of the units could be used for short-term rentals. A PUD is a special type of zoning classification that allows for altering the underlying development requirements for unique projects that do not fit neatly into one of the standard zoning districts. The property was required to go through this process because it exceeds the threshold of 24 units on the lot. The proposal also does not meet some of the basic rules of the zoning code, including density, setbacks, height and off-street parking.

The city issued requests for development proposals in October 2020, even though the school district still owned the building and the school year wouldn’t conclude until 2021. The collaborative approach drew three housing proposals and expedited a project that was in the best interests of both parties.

Developer: The city and school district selected S.C. Swiderski in Mosinee, Wisconsin, in November 2020. It’s the same development firm that constructed the Sturgeon Bay Estates apartment project on Grant Avenue on the city’s west side.
Number of units/style: 26 townhome-style one- and two-bedroom units with attached garages
Rental rates: Workforce and market rates, from $845 to $1,145 monthly
Status/what’s next: The conceptual plan has been approved and permission granted to collapse the preliminary and final planned unit development (PUD) approval. The Common Council approved the development agreement Tuesday evening. The assistance includes buying the property for $1 from the school district, and the city paying for the cost of demolition and granting the developer construction assistance of $7,700 per unit, or $200,200 for the 26 units. Approximately $50,000 will be paid upon completion of each of the four buildings.

The city will create another Tax Incremental District (TID), the city’s fifth, to help pay for the assistance requested by the developer, and it hired financial consultant Baird to do so for $6,750. A TID allows all the future property taxes from the new development to be collected by the city to repay funds borrowed for the upfront expenses and incentives. All the districts that will eventually benefit through the increased market value, such as the school district, help in this way to cover the expenses to create the new development.

The school is expected to vacate the building in October. Final site plans and demolition will follow.
Target construction start: Spring 2022

School employees used this site of just under one acre primarily as a parking lot. The city issued requests for its development in October 2020, along with the request for the Sunset School property.

Developer: Doreen Phillips of Maritime Heights. The development would be constructed adjacent to Phillips’ 34-unit Amity Fields apartments.
Number of units/style: 10 two-story, townhome-style units (eight two-bedrooms, two three-bedrooms)
Rental rates: Workforce and market rates between $795 and $995 monthly.
Status/what’s next: The Common Council selected the developer in November 2020, and the Sturgeon Bay Plan Commission approved a conditional use permit on June 30. That completes the city’s formal approval process. The project does not require council approval. The developer already has a purchase agreement with the school district to purchase the land for $1. No other incentives were extended.Target construction start: The project is expected to be under construction this fall.