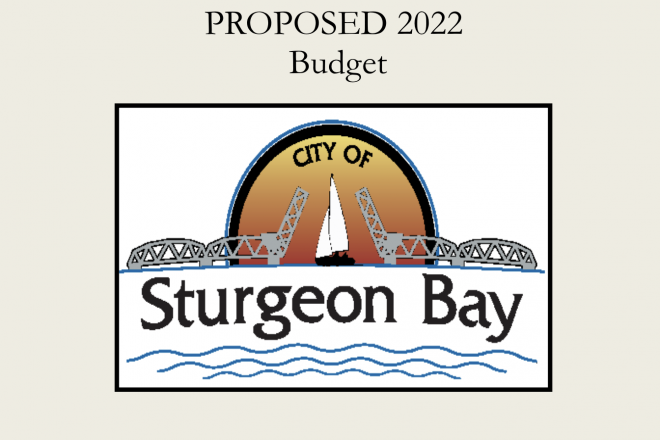 2022 budget projects a reduced rate for city portion of tax

City of Sturgeon Bay property owners can expect a lower tax rate in 2022 based on a preliminary budget and tax levy approved by the Sturgeon Bay Common Council.

If all goes as planned, the tax burden on the proposed $17,696,495 budget would decrease in 2022 by $9.67 per $100,000 of home value – at least for the city’s portion of the property tax. Three other taxing authorities also levy property owners: the school district, Door County and NWTC.

The numbers won’t be made official until the Common Council votes on the final budget and levy following the public hearing scheduled for Nov. 1.

The property tax is the city’s single largest source of revenue, expected to fund 72.67% of city expenses in 2022. Increasing it 2% raises an additional $274,052 and brings the total tax-levy revenue to $7,333,310. Applying the income expected from the city’s Tax Increment Financing Districts then decreases the tax rate by 1.2% over 2021.

When the public budget discussions began at the end of September, City Administrator Josh VanLieshout presented a budget deficit of $154,040 if the city adhered to the 2% targeted tax-levy increase.

“This is the first time in 20 years I’ve come to an elected body without a balanced budget,” VanLieshout said, asking the council members to think about the options and how they wanted to balance priorities.

By the second meeting on Oct. 4, VanLieshout and Valerie Clarizio, the city’s finance director/treasurer, presented a balanced budget with the 2% increase. They accomplished that with some increased revenue projections and deferred purchases and projects, including a fire department brush truck ($206,000); replacement dump truck and snow equipment ($170,000); one-ton replacement truck ($50,000); replacement water-weed truck; scaled-down pavilion for Sunset Park (from $245,000 to $200,000); and about $20,000 less in street work.

“The need doesn’t go away; the water weeds will grow, we’ll have streets to fix, but we’re trying to balance things out and what we can reasonably supply services for,” VanLieshout said.

The city passed a modest tax-levy increase for 2021 of 1.1%. That didn’t prevent the sticker shock delivered to many Sturgeon Bay property owners this year. One of the reasons was the citywide revaluation that reassessed the value of all city properties for the first time in 15 years. Another factor was the 19% increase levied by the Sturgeon Bay School District for a building referendum that voters had approved.

“I think the council is trying to be sensitive to that shock of last year,” said Mayor David Ward.

Alder Gary Nault made a pitch for the higher tax-levy increase.

“That was the schools,” Nault replied.

Ward pressed for a disciplined approach.

“Because we can do it? That’s not a good reason,” he said. “There’s the old conservative argument of what you need or what you want. That’s where we have to draw the line.”

The alders met with department heads to talk about the budget as a Committee of the Whole on Sept. 27 and again on Oct. 4 when they recommended the preliminary budget and levy that the Common Council then approved Oct. 11.

The city heads into 2022 with cash reserves equal to 42% of budgeted expenses. VanLieshout said healthy cash reserves are considered to be 25% of expenses.

Capital Purchases and Improvements for 2022

Deferring some of the projects and purchases intended for 2022 would not only help balance the budget, but also redistribute more evenly over the next few years the city debt, which is expected to peak in 2024 before dropping back down.

“So deferring some of those debt purchases, we’ll see the peak flatten out,” VanLieshout said.

The city has borrowed money twice during the past year at record-low interest rates. Ward said he’s heard from residents that the city should just borrow the money when it’s so cheap.

“That’s true, but you have to repay it even if it’s cheap,” he said.