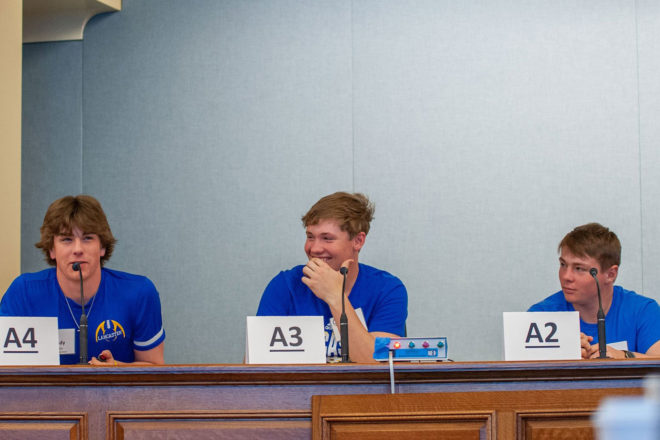 by WISCONSIN STATE JOURNAL EDITORIAL BOARD

Students across Wisconsin, start drawing and writing about the First Amendment.

Teachers and parents, please encourage them.

The Wisconsin Newspaper Association, through its foundation, is seeking opinion columns and cartoons from middle schoolers and high schoolers this month as part of its second annual contest promoting civic education and engagement.

With our nation increasingly divided and often incited by political extremes, young people need to learn how our democracy functions and why our freedoms – especially to speak and write – are so vital to keeping America strong.

Many school districts in Wisconsin, including Madison’s, don’t require a civics class. That’s unfortunate and should change.

America’s next generation of leaders needs to understand our nation’s separation of powers, its respect for individual rights and the rule of law. America will need its young people to participate in civic life as they grow older. That includes voting, speaking out, respecting the right of others to speak, and running for public office.

The Wisconsin Newspaper Association’s Civics Games Editorial Writing and Cartoon Contest helps to accomplish these goals. It seeks 500-word opinion columns from high school students and 200-word letters to the editor from middle school students about the First Amendment. It also encourages editorial cartoons on the same topic.

Organizers suggest that students should write or draw from personal experiences, current events and historical examples.

The Civics Games Editorial Writing and Cartoon Contest comes with prize money of $500 for first place, $250 for second, $100 for third and $50 for honorable mention in each division. The deadline for submissions is 11:59 pm on Monday, Oct. 24, with winners announced in early December.

Writing and drawing about the First Amendment could be assigned by a teacher or something a teenager does from home. The contest is open to all Wisconsin middle and high school students, including those who are home-schooled.

A good place to start on an idea for an essay or cartoon is by reading the First Amendment: “Congress shall make no law respecting an establishment of religion, or prohibiting the free exercise thereof; or abridging the freedom of speech, or of the press; or the right of the people peaceably to assemble, and to petition the Government for a redress of grievances.”

What does that mean to students? How does it affect them? Why are those words important?

A good column, letter to the editor or political cartoon offers a strong opinion and often a call to action. Last year’s winners wrote about participating in a mock presidential debate and imagined life without free speech. The winning cartoonists branded hate a virus and satirized bogus claims on the internet.

The Civics Games Editorial Writing and Cartoon Contest is so much more than a game. It’s what our democracy requires: a lively dialogue and competition of ideas to win the support of fellow citizens.

We look forward to publishing this year’s winners.

This editorial is republished with permission from the Wisconsin State Journal.