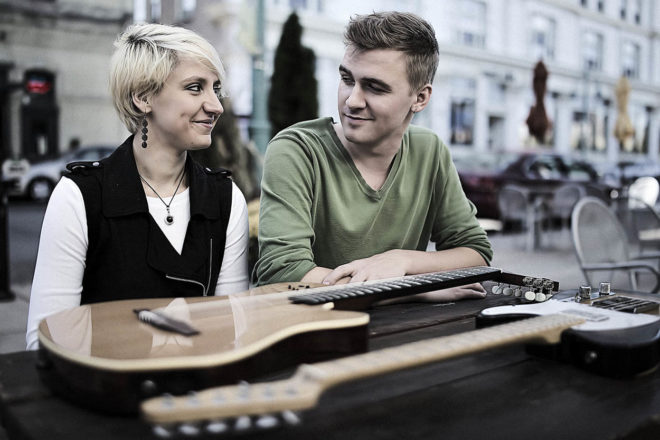 Classical and jazz guitar meld with expressive voices during the Sara and Kenny concert at Lost Moth Gallery.

The duo recorded their first album in 2015 and released their second album, Familiar Rhythms, in April 2017. SENTIREASCOLTARE described the album as “an intimate and vivid portrait of a duo that understands music as a family thing.”

Sara grew up in southern Italy and after obtaining her degree in classical guitar from the Santa Cecilia Conservatory in Rome, she moved to Wisconsin. Kenny, a Wisconsin native, began his study of classical piano and guitar as a child then attended Berklee College of Music in Boston. The two met in Milwaukee and started composing music together in 2015.

Their style is a meltdown of classical music, jazz and folk. The diverse and unique style portrays music as a form of constant dialogue between our intimate selves and the universe.

Sara and Kenny perform May 24 at 7 pm. Doors open at 6:30 pm with snacks and drinks. Jeanne Kuhns and George Sawyn open for the duo. Tickets are $20 cash. There is limited seating, so reservations are recommended. Tickets are sold at the door depending on space.

Lost Moth Gallery is located at 7975 Hwy 42, Egg Harbor. For more information and to reserve tickets visit lostmothgallery.com or call 920.495.2928.