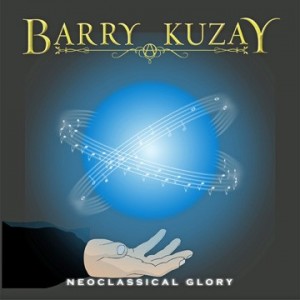 By day, Barry Kuzay is a mild-mannered engineer employed at Roen Salvage Co. in Sturgeon Bay. But in his free time at home in Algoma, where he lives with his wife and daughter, he enters his home recording studio and becomes neo-classical metal guitar shredder Barry Kuzay.

Kuzay recently released his first recording, a collection of eight tunes on a CD he titled Neoclassical Glory, after the nearly 18-minute epic that kicks off the record.

“I listen to two genres of music, classical and heavy metal, although not the heavy metal you normally hear on the radio,” Kuzay said. “There are some fans out there who try to blend the two genres together, but there’s still quite a bit of a blues element to it. I wanted to make some music without that, I guess.”

Kuzay, who describes himself as a “musical hobbyist,” spent more than three years making NeoClassical Glory, “because I’ve got a full-time job and family. So it’s just when I can squeeze in some free time when I do that,” he said. “It’s a big weight off my shoulders to have it done, finally.”

Helping him shoulder some of the musical weight was his older brother Ben, an accomplished bass player (benkuzay.com).

“Ben played bass guitar on the album because that’s his specialty. He just finished his fourth album,” Kuzay said. “He’s just a machine. He can learn something, play it, and in a couple of takes it’s recorded. This is his career, so I had a little help from him on what kinds of things you have to do to record an album.”

In fact, the project was something of a family affair, with Kuzay’s younger brother, Daniel, contributing some keyboards and lead guitar. “Daniel is a hobbyist, too. I wanted to get him involved.”

For the final family connection, the portrait of Kuzay on the back cover of the CD booklet is by his artist father Sevki Kuzay.

Kuzay said the project began for his own amusement.

“I really did it for myself, but thought, now I have a CD’s worth of music. I might as well put it out. Maybe somebody will like it.”

Through the long, painstaking process, Kuzay learned that he enjoyed the process, which has got him thinking about his next project.

“I thought I would put this stuff aside and be done with it,” he said. “But when I got this mixed, I learned so much from the guy who was mixing it about the techniques and tricks he can do. It gave me a whole bunch more ideas of what I could do next, things that I thought I wouldn’t be able to record at home, like acoustic instruments. After seeing how he does it, I suppose I could do that at home. So I have some ideas percolating. It will probably be 10 years before I get another one done.”

You can find Neoclassical Glory at Amazon, iTunes and barrykuzay.com.