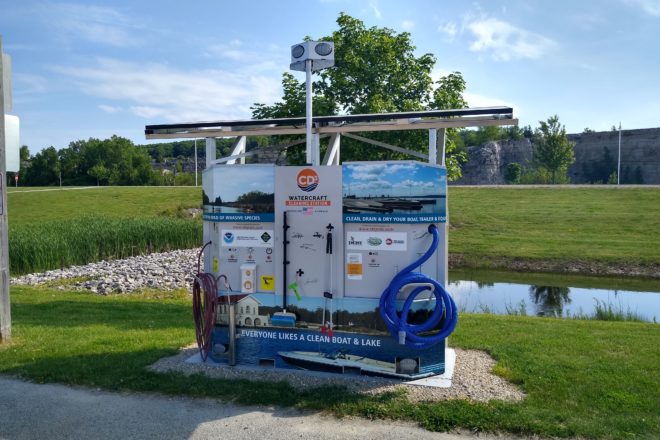 Two CD3 Watercraft Cleaning Stations were installed in March at Door County’s busiest county-owned boat launches: Robert M. Carmody County Park in Little Sturgeon and George K. Pinney County Park in Sevastopol, where the pictured unit is installed. The electronic stations remind boaters and watercraft users to clean, drain and dry their boats, trailers and equipment; and they give users the tools to do so: a pressurized air hose, brush, drain-plug removal tool, extension picker for hard-to-reach vegetation, vacuum hose and floodlight. Submitted.

Last season, 8,884 boats were launched at the six Door County-owned parks that have boat launches. This number doesn’t include boaters who may have ignored the solar-powered pay stations, those with annual passes who launched more than once, or the private and municipal marinas and launches around the county.

The CD3 units – for Clean, Drain, Dry and Dispose – were funded last year with a $116,854 grant from the Wisconsin Coastal Management grant program and installed in late March. The grant also paid for boat-cleaning stations at three Ahnapee Trail access locations to combat terrestrial invasives.

“It was a really great opportunity to install some infrastructure,” Koyen said.

Aquatic invasives such as Eurasian watermilfoil or curly-leaf pondweed are spread to new waters primarily by watercraft – in ballast water, on boats or in the water of a live well or bait bucket, according to the Wisconsin Department of Natural Resources. Even noninvasives can contribute to the spread, Koyen said, such as when a boater transports native plant material that contains the tiny, hard-to-see larvae of the iconic invasives: zebra and quagga mussels.

Other aquatic hitchhikers are invisible, such as viral hemorrhagic septicemia, Koyen said. This deadly virus is transmitted from fish to fish through reproduction or close contact with contaminated water. It affects 34 species of fish, including bass and lake whitefish, and its spread has caused mass mortality events within the Great Lakes.

The hoses, brush and other tools on the new units are free to use. They also serve as visual reminders of boaters’ and anglers’ responsibility under Wisconsin law to inspect boats and trailers, remove any attached aquatic plants or animals, and drain all water.

“It would hopefully trigger them to say, ‘Oh, yeah, I did forget to do that,’” Koyen said.