It’s part of the price you pay for a night on the town. Drink too much, you get a hangover and, if you’re responsible, a quest for a ride back to your car the next morning. You get a thin wallet, and perhaps most annoying – especially for non-smokers – you get a pile of clothes smelling like an ash-tray and dry, burning eyes.

But now Steve Mueller is giving those put off by smokey bars a new option in the most unlikely of locations.

Mueller owns the AC Tap, the quintessential Door County dive bar. Standing stubborn halfway between Sister Bay and Baileys Harbor on Hwy 57, everything about the Tap’s aging exterior tells you it’s going to be cloudy inside.

“I hear all the time from people, ‘Your food is great, but it’s just too smokey in there,’” Mueller, a non-smoker, said. Though the bar has an air exchange system, its low ceilings and cozy interior make clearing the smoke a futile effort.

“Who has the lowest ceiling in Door County?” Mueller asked rhetorically. “We do. All you need is one or two smokers and it fills the room.” 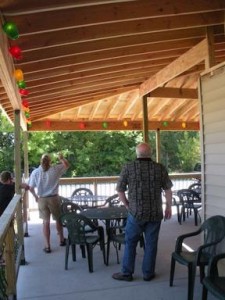 Owner Steve Mueller has built a patio to accommodate smokers.

So beginning June 1, smoking was banned inside the AC Tap, a move Mueller said he always wanted to make and finally got around to doing.

Smoking bans are already in effect in the cities of Madison and Appleton, and 33 other communities in the state have bans of various scopes, according to Smokefree Wisconsin. At least 24 states have passed comprehensive bans, but attempts to ban smoking in workplaces statewide have been unsuccessful, however.

The Tavern League of Wisconsin has fought hard against efforts to ban smoking in public places. While Ohio, Illinois, Minnesota, and Iowa all have bans in place, the tavern league has argued that a ban would have disastrous effects on small bars, but Mueller sees the issue differently.

“I feel I have more to offer than a place to smoke,” he said. “There’s another benefit I didn’t think of when we did it too. Smokers have discovered that I have a patio now, and when they go outside it gives me more room inside. I’ve got nothing against smokers wanting to smoke, but the non-smokers don’t have a choice. I can sit next to you when you’re having a beer and it doesn’t affect me at all. But if you’re smoking, I have to smoke.”

“There’ve been no problems at all at night,” he said. “Daytime has taken a little bit of a hit; but I think it’s great, and I’m a smoker.”

Warner was out back on the patio, now referred to as “the smoker’s pavilion,” finishing a drag on his cigarette with a couple other patrons. By the middle of July the patio will have a roof over it, making it a more comfortable spot for the Tap’s puffing patrons. Next winter Mueller will have heaters that will turn on when a motion sensor detects a person on the patio, giving those who need to smoke a “fire” to huddle around.

His bartenders figure they’ve lost a few daytime patrons, but not too many, and they say they’ve already noticed a number of new faces in the doors who welcomed the change. Most of those who aren’t happy with it soften when Mueller explains the impact on his utility bills. He figures he loses up to $10,000 in utility costs annually because of the smoke-filled air he pumps out of the building, wasting air conditioning in the summer and heat in the winter.

Mueller said some of the employees have complained, “but they don’t smoke in their own house, so why smoke in mine?”

In the long run Mueller hopes the move makes his tavern more welcoming to diners, to become a place people “can get something to eat, go to their kid’s ball game, and not smell like smoke.”