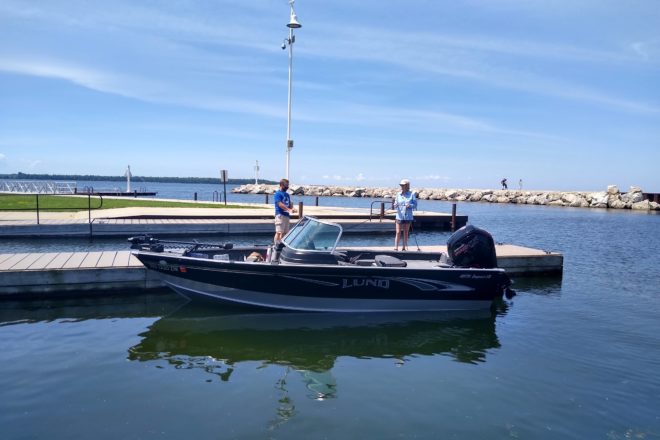 The Wisconsin Department of Natural Resources (DNR) created the Clean Boats, Clean Waters (CBCW) program in 2004 in an attempt to help lower the impact of aquatic invasive species. Program inspectors perform boat and trailer checks, disseminate informational brochures and educate boaters about how to prevent the spread of invasive species.

Door County joined CBCW a few years after it was established, and each year ever since, volunteers have been checking boats and educating boaters at local boat landings.

“We know that the prevention guidance of ‘inspect, remove, drain, never move’ is effective at preventing the spread of invasive aquatic plants and animals,” wrote Erin McFarlane – the statewide CBCW educator with the University of Wisconsin-Extension Lakes Program – in a recent press release. “Taking a minute or two to remove all the plants, animals, mud and debris from your boat and trailer while draining water from the bilge and live well is all it takes to prevent a new invasive species from establishing [itself] in your favorite lake or river.”

Although DNR surveys of Wisconsin boaters and anglers show that most perform these actions nearly every time they’re on the water, more inexperienced or infrequent boaters are often unaware of the proper prevention steps. If any boater – regardless of experience – neglects or forgets to take preventive measures, it creates the potential for detrimental environmental and municipal effects.

“I think it’s a really important effort,” said Samantha Koyen, coordinator of the Door County Invasive Species Team. “Each invasive species has potential ramifications to our economics, our tourism, our ecology and so on.”

According to Koyen, preventing the spread of an invasive species is easier by far than trying to deal with it after it has already established itself in a body of water.

“Millions of dollars are spent [on] addressing invasive species,” Koyen said. “However, prevention is so cheap when you’re comparing it to trying to control species.”

Koyen said that Door County is an extremely diverse area and has federal and state partners that recognize the importance of what the county possesses ecologically. If the county were to lose such ecological diversity to invasive species – creating dense monocultures – Door County could lose certain habitats and therefore certain species.

During the July Fourth weekend, volunteers and staff members worked hard to promote awareness of aquatic invasive species while maintaining social distancing. They inspected a total of 303 boats in the county during the weekend.

“Once boaters realize the importance of following the rules and regulations from the DNR, it’s oftentimes too late,” Koyen said. “That’s why the Clean Boats, Clean Waters effort is so imperative in creating an educational outreach component: so people know beforehand why we are doing this.”