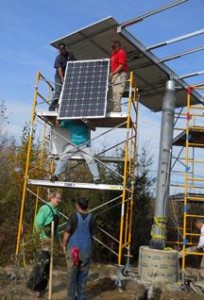 Crossroads at Big Creek is already reaping the benefits of the installation late last year of an Enphase Solar Panel. Construction began on the solar project last September, with most of the actual labor taking place on 10/10/10 as part of a Global Work Party.

When people ask what the payback will be on the solar array at Crossroads at Big Creek, they are probably expecting an answer of 15 to 20 years. The truth is the payback on the solar panels started the day Crossroads went on-line. Their objective was to create energy without releasing carbon dioxide into the atmosphere.

In March – notoriously a dreary, foggy month in Door County – the solar panel generated 358 kWh of energy, offsetting 609 lbs. of Co2. With that production, the Crossroads predicts that as the Ehphase Solar Panel system heads into summer – with longer days and the sun higher in the sky – they will exceed the projected 4,100 kWh per year.

Without adding to their carbon footprint, Crossroads is able to make much of the energy they use, confirming the viability of solar power in Door County. Plus, thanks to Sturgeon Bay Utilities and Wisconsin Public Power’s solar energy buy-back, the value of their renewable electrons are tripled.