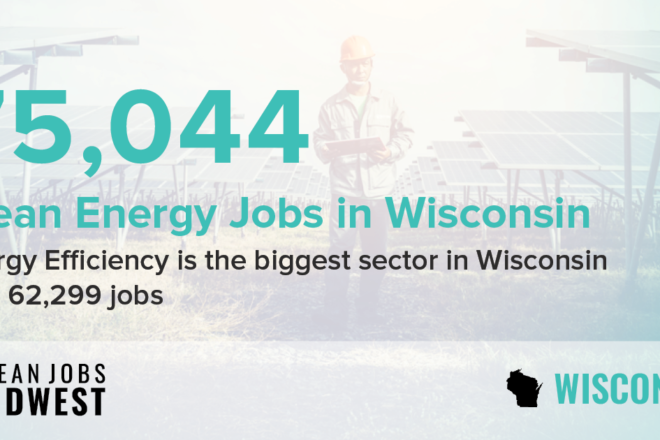 Last week when Heather Allen of RENEW Wisconsin was at the Catholic Youth Expeditions campus on Kangaroo Lake to take part in the dedication of a 20kw solar array, she referenced a new report that found 75,000 jobs in Wisconsin are clean energy jobs.

“Seventy-five thousand clean energy jobs in Wisconsin means more than all the waiters and waitresses, computer programmers, lawyers and web developers in Wisconsin combined,” she said.

Those jobs are in all 72 counties, however, Dane and Milwaukee counties have the highest number of clean energy jobs at about 28,000 of the total, according to the report, Clean Jobs Midwest, which was produced by the Clean Energy Trust (CET) and the national, nonpartisan business group E2 (Environmental Entrepreneurs).

Clean Jobs Midwest found that 714,257 jobs are provided in clean energy in the 12 Midwestern states, which is five percent growth above the previous year. Clean energy jobs amount to 2.1 percent of all jobs in the region.

“The beauty of data is that it cuts through political rhetoric. These findings show that clean energy jobs in renewable energy and energy efficiency are growing across the region and that the Midwest continues to demonstrate it is a fertile region for clean energy innovation, enabling businesses to launch, grow, and create jobs,” said Erik G. Birkerts, CEO of Clean Energy Trust, in a press release announcing the report. “Everyone should embrace and support these sectors that are driving economic development.”

Next at 11.6 percent, or 83,127 jobs, are the renewable energy jobs. That includes 38,759 solar workers and 35,478 wind workers. This category also includes jobs in bioenergy, geothermal and low-impact hydroelectric power.

Right behind is the advanced transportation jobs category at 11.1 percent, or 79,470 jobs. This sector includes jobs building and developing hybrid and plug in electric vehicles (EVs), alternative fuel vehicles and fuel cell vehicles. Due to fierce competition from European and Japanese carmakers, this sector had an 18 percent decline with the loss of 17,363 jobs. However, EVs were a bright spot with 28 percent growth amounting to 20,080 jobs.

The final category is clean fuels, at 1.1 percent, or 7,861 jobs. These jobs include work in non-corn ethanol, non-woody biomass and other technologies not yet in wide commercial production, such as algal biofuel, landfill gas and advanced biofuels.

Wisconsin experienced a one percent decline, or a loss of 863 jobs, in the clean energy job sector, yet employers remain optimistic, projecting to add 1,500 jobs in the next year, for two percent growth.

Wind jobs were up 27.4 percent, for a total of 1,549 jobs in that sector. Solar experienced a six percent decline, partially due to uncertainties regarding tariffs at the federal level. There are 3,802 solar jobs in the state; 267 bioenergy jobs; 23 low-impact hydroelectric jobs; and 19 geothermal jobs.

The report states that Door County has a total of 280 clean energy jobs, with 25 of those in renewable energy and 241 in energy efficiency.

You can read the full report at cleanjobsmidwest.com.