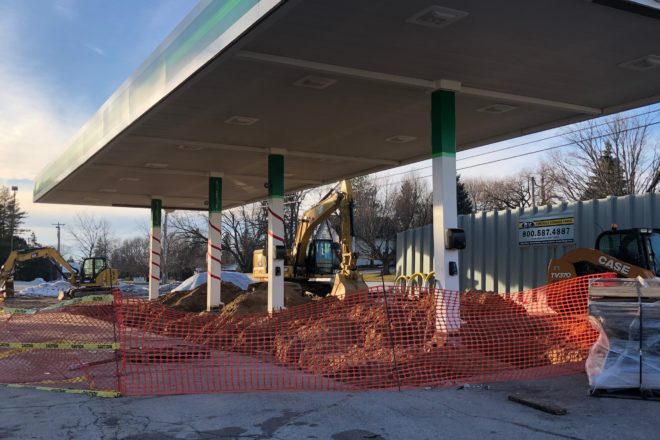 A suspected leak from an underground storage tank this summer preceded a series of cleanup measures at a gas station in Sturgeon Bay.

The most visible work took place just before Christmas at the BP station at 1767 Egg Harbor Road, when contractors worked before dawn and into the late evening to excavate and then replace four old, underground storage tanks.

The same site had pollution-monitoring protocols in place due to a tank leak in 2001, so both the historical case and the 2021 investigation appear in the state’s Bureau for Remediation and Redevelopment Tracking System list of cleanup actions.

Over the years, gas station sites and other properties throughout Door County have appeared on the list of leaking underground storage tank investigations, but not every site where tank removal has occurred or is occurring appears on the list.

A current tank-replacement project and complete modernization of gas pumps and pipes happening now at the Mobil/Sub Express in Sister Bay is not on the bureau’s list at this time for a leaking tank or spill, according to Karen Campoli, senior hydrogeologist for the Wisconsin Department of Natural Resources’ (DNR) northeast region.

At the Sturgeon Bay site, Raghu Singh, environmental consultant for OM Enterprises, said owner Ranjit Dhaliwal (of RGC Enterprises of Mequon) had planned to replace underground storage tanks and install modern fuel pumps in 2021. The scope of the project grew dramatically after the reporting of an unusual loss of regular unleaded gasoline during the summer.

Wisconsin DNR records show that no gasoline – referred to as a sheen of “free product” floating atop water – showed up in samples at monitoring wells this spring or early in the summer. Singh said the station had old gas pumps, and he suspects that a calibration problem led to the reported loss of 1,441 gallons of fuel in July.

When contractors removed and replaced a diesel tank and two gasoline tanks, they found no holes, Singh said. A fourth tank – which had contained regular unleaded gasoline and which failed pressure tests and was taken out of service in September – showed evidence of leaking but had “no large hole,” according to a spokesperson for the Wisconsin Department of Agriculture, Trade and Consumer Protection (DATCP). “Notification of a hazardous substance discharge” was filed with the state on Sept. 13.

Singh said if a large amount of gasoline had leaked, it would have shown up in nine other monitoring wells on or near the site, or in private wells on neighboring properties. The state notified two nearby owners of private wells about the leak, but DNR documents show that the water quality at those wells “did not appear to be impacted by petroleum hydrocarbons.”

In September, a DATCP inspector found traces of gasoline in a test well on the site and then ordered the pressure tests. The inspector stated that oil collected from soil “smelled of fresh gasoline, not of historic or long-term contamination.”

Both Campoli and Trevor Nobile, DNR field operations director for remediation and redevelopment, said the tank owner and consultant have been responsive in containment efforts by conducting tests, sampling, and taking measures to ensure that contaminated soil and groundwater that’s on the site is pumped and removed. However, Campoli said that investigation and monitoring will continue at the Sturgeon Bay site.

In early November, the state called for the installation of a 40-foot-deep well to remove groundwater from the site. Pumping and removal of water began Nov. 15. In December, the parties filed a 242-page work plan.

Before Christmas, 1,136 tons of contaminated soils were hauled to a certified hazardous waste landfill in Whitelaw, Wisconsin, Singh said. He said another 300 tons of soil will be removed from below the fuel-pump canopy area by early January.

After Christmas, Singh said he was awaiting results from 29 soil samples he took from throughout the site and the bed under the tank that failed the pressure test. He said if those samples come back clean or mostly clean, he may ask to scale back the work plan. Campoli and Nobile said state team members, the owner and the consultant will meet about the next steps.

Operators of the convenience store on the property have kept the retail business open as much as possible throughout the excavation and cleanup work around the fuel pumps.