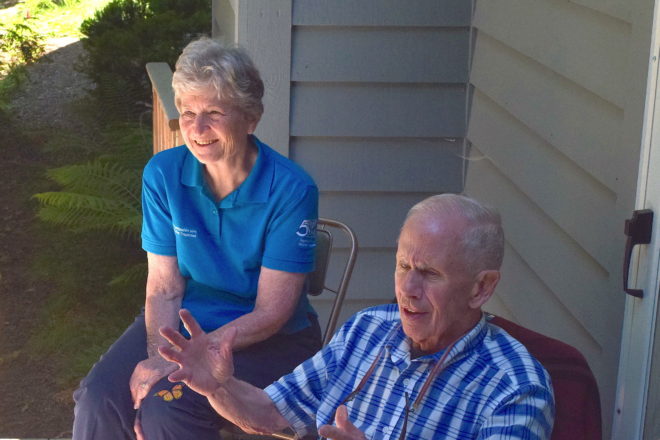 During the 2012 presidential debates, Sister Bay resident Dick Smythe recalls being profoundly disappointed not hearing any discussion about climate change.

Smythe considers himself a lifelong environmentalist and environmental researcher, and has always been fond of the outdoors.

“I’ve always been interested in the green movement,” he said. “I started watching birds and collecting feathers and insects before I went to kindergarten. I’m just as interested now as I was as a five-year-old kid. I guess I just never grew up.”

Smythe graduated with a PhD in Entomology from the University of Wisconsin-Madison and spent his entire career with the USDA Forest Services as a scientist. The last 13 years of his career were spent at headquarters in Washington D.C. where he served as the Nationwide Director of Forest Environmental Research.

While watching the 2012 debates, Smythe felt it was abominable that such a vital issue like climate change could be overlooked.

Feeling obligated to do something about it, Smythe began speaking on the topic of climate change to his fellow members of the Unitarian Universalist Fellowship of Door County, where he was a regular speaker.

“After my first talk in November 2012, my then 15-year-old granddaughter came up to me in tears and said ‘Grandpa, grandpa, what can I do?’” he said. “Well, that was tough for me.”

After giving his second talk, Smythe’s wife, Mary, came to him and told him that the full extent of their efforts required more than speeches at the UU Fellowship. Like her husband, Mary Smythe had also been a lifelong proponent of the green movement and an outspoken environmental activist

“I’ve always found my joy and peace in being outside,” she said. “Living with Dick, I always knew early on all about spotted owls and acid deposition.”

Dick and Mary give a lot of credit to fellow Sister Bay resident Roy Thilly in establishing the local coalition. Thilly, who grew up outside New York City, said he’d always been more interested in the political and legal sides of climate change issues. He has served as co-chair of Gov. Jim Doyle’s Task Force on Global Warming and on the Governor’s Task Force on Energy Efficiency and Renewables.

“Roy has been just invaluable with his prior experience and his vast array of contacts,” Dick Smythe said.

Much of the work done by the Climate Change Coalition attempts to remove the partisanship attached to advocacy for a more sustainable future. When working under Gov. Doyle, Thilly recalled that proposed climate legislation came from both sides of the political aisle. Since then, he said the public’s views on climate change have become much more polarized.

“Early on, it wasn’t us versus them, it was ‘we need to,’” Mary Smythe said. “Our focus is on consistently being publicly non-political because we do not want to be just seen as a Democratic group. If we are going to get through this, we need as many people on board as possible.”

In Door County however, they said that so much of the challenge is just making people aware of the threats of climate change.

“It’s difficult for people to get excited about an issue which they have a hard time seeing,” Thilly said.

The group is working on ways to keep the issues in front of people. For instance, they are looking to provide drink coasters with climate facts to local restaurants.

“The politics aren’t going to move until there is a significant push,” Thilly said. “You’ve got to have people on both sides of the party lines recognizing the need to deal with the climate. Our philosophy has been that we don’t need to persuade the choir; they’re already there. We need to keep them energized, but we need to keep moving the broader public’s opinion.”

Since its birth in 2012, the Climate Change Coalition of Door County has gotten 125 local businesses to sign its Climate Declaration, conducted outreach to local schools and faith-based organizations, and participated in and organized environmental events around the county. It also holds an annual climate change forum that was canceled this year due to the COVID-19 pandemic. The group is currently working on alternative ways to keep the public informed on the impacts of climate change, and how to lead more sustainable lifestyles during the time of COVID-19.

Additionally, Dick and Mary Smythe were recently selected by the Lakeshore Natural Resource Partnership as winners of the Lake Michigan Stakeholders’ Champions of Conservation Award, honoring their work in forming and leading the Climate Change Coalition of Door County.