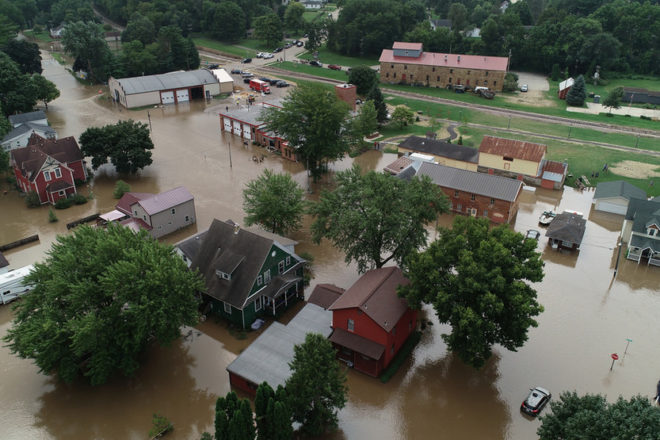 An aerial view of flooding in Mazomanie on Aug. 21, 2018. Photo courtesy of Wisconsin Air Coordination Group and Wisconsin Drone Network.

Last summer, extreme weather and flooding impacted rural areas like my farm in the Driftless Region in Wisconsin. While farmers, myself included, have continued to struggle with large rain events this summer, urban communities are also dealing with a lot of flooding. What has happened in Dane County should be a wake-up call for communities across Wisconsin including Door County, where a highly unusual rain storm in 2014 had devastating impacts.

The late summer of 2018 was abnormally rainy in many parts of Wisconsin. In Madison, for example, average monthly rainfall totals were 4.27 inches in August, and 3.13 inches in September. Yet in just one intense day on August 21, the Madison area received between 11 and 13 inches of rain, the amount it typically gets during the course of an entire summer. Flash floods damaged cars, homes, and businesses on Madison’s west side as well as in suburbs like Middleton and the towns of Cross Plains and Mazomanie.

As less-intense storms continued through the following weeks, more and more water accumulated in south-central Wisconsin watersheds, adding to already high lake levels in the slow-moving chain of Yahara lakes. The result was sustained flooding in the heart of the Madison, largely on the near east side. A timely and prescient article in the Wisconsin State Journal in early August warned that the Madison Isthmus is extremely vulnerable to flooding due to a combination of overdevelopment, weakened wetland protections, and frequent high-intensity rains. Rather than absorbing rain, streets, rooftops, and other impervious surfaces keep the water flowing, which can lead to flash floods and rising lake levels. The damage assessment from these late summer storms for Dane County has now topped $154 million. More than 1,500 homes in Dane County were affected by flooding, of which only about two percent were covered by insurance. 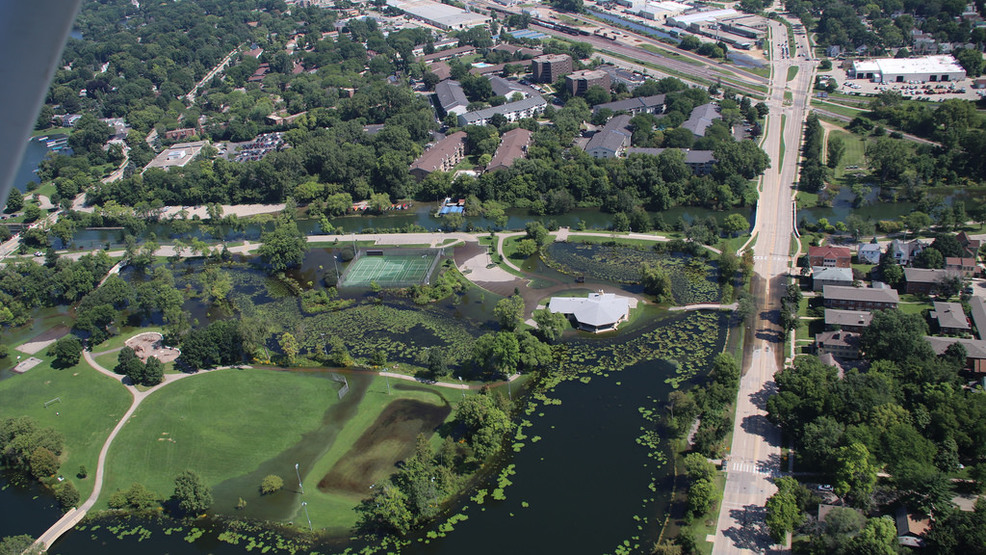 The Yahara River overflows its banks near Tenney Park on the east side of Madison, Aug. 23, 2018. Photo courtesy Wisconsin Air Coordination Group and Drone Network.

Shortly after these floods, another massive rain system submerged numerous communities in the Kickapoo Valley and across central Wisconsin. Rushing floodwaters knocked down power lines, washed out roads, and destroyed acres of crops in fields. The damage assessment estimate for flooding across the state during late summer is now at $234 million dollars (and that does not include the June 2018 floods in northwestern Wisconsin).

Scientists anticipate that climate change will bring greater total amounts of precipitation, and also more frequent and intense storms, to the Upper Midwest. This means the “abnormal” storms we recently experienced may soon become part of a new normal pattern. We can hope that the 2018 floods will open people’s eyes to the environmental challenges we face – and urge them to action.

There are various strategies Wisconsin’s leaders can implement to help cope with extreme rainfall, as well as ways to reduce our contributions to the warming climate that intensifies them. While a number of communities are working to implement climate resilience and adaptation measures at local levels, a larger-scale approach could more effectively deal with the widespread and rapidly accelerating impacts of extreme weather.

However, trends in statewide practice and policy aren’t leaning in this direction. Governor Walker recently signed a bill limiting the authority of local governments to adopt stormwater runoff standards stronger than the state’s own standards. Meanwhile, Wisconsin developers aren’t always incorporating water-resilient features such as retention ponds, permeable surfaces, and smart design that can capture runoff. Earlier this year, Wisconsin legislators passed, and the governor subsequently signed into law, a bill removing protections from tens of thousands of acres of the wetlands under state jurisdiction. It’s worth noting that many of the wetlands no longer protected are in proximity to population centers – the areas most likely to be developed and most in need of wetlands to capture and filter urban stormwater.

The optimist in me hopes that we can take the information and resources we have to address climate change and use them proactively. My pessimistic side, however, says that the next best option is to hope that people learn a lesson when disaster strikes. If the floods of summer 2018 have taught us anything, it’s that disaster will strike again. Which is a good reminder that climate change isn’t some far-off problem for Door County, other states and countries, and so importantly, for future generations. We’re starting to feel the impacts of it right here and right now. Rather than waiting for the next disaster, let’s start investing in resilience so that devastating floods like the ones that happened this summer don’t become our new normal.

Chelsea Chandler leads the Wisconsin Academy of Sciences, Arts and Letters’ Climate & Energy and Waters of Wisconsin Initiatives. Before joining the Academy, she worked as a scientist in the Stockholm Environment Institute’s Climate and Energy group and studied climate change adaptation through water resource management in the Andes with the International Union for Conservation of Nature. She has a master’s in Global Change Science and Policy from the Yale School of Forestry & Environmental Studies and a bachelor’s in Atmospheric Science from the University of California, Berkeley.