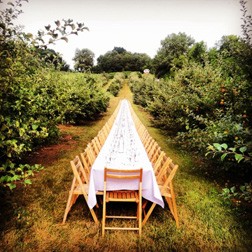 Outstanding in the Field, the pioneering farm dinner series that has toured the country for 15 years, adds Door County to its itinerary Aug. 3.

Jim Denevan and his crew of eight table-setters will take their 1953 Flxible bus to Waseda Farms in Baileys Harbor to serve a table of 140.

For 15 years Denevan has paired the nation’s most acclaimed chefs with the farms where they source their food for almost 700 dinners in the field, served at a single communal table.

The dinner places Door County and Waseda on a list that includes some of the most respected farms in the country. Guest Chef Kelly Qualley of Hinterland in Green Bay will prepare the meal, putting him in the company of James Beard award-winning chefs. Chicago’s Paul Kahan, Jason Vincent and Paul Virant, as well as Madison star chef Tory Miller have all worked previous Wisconsin stops. Qualley says he’s not overwhelmed by such good company.

“I’m anxious about doing it, but not intimidated,” he says. “I feel that what we do in terms of working with local producers and taking the time to craft their ingredients is up there with anyone.”

Dan Van Rite, chef at Hinterland’s Milwaukee location and the guest chef at two previous Outstanding in the Field dinners, recommended Qualley, who didn’t think long before choosing his farm.

“Waseda has been a great partner of ours, and for me as a chef, they offer more than any other farm,” Qualley says. “They have the garden, and a lot of different proteins I can use with poultry, pork, and beef all there on the farm. You don’t find that too often. Plus, it’s one of the most beautiful farms you’ll see.”

Death’s Door Spirits, which Denevan calls a leader in artisanal spirits, will also be featured at the dinner.

Denevan was a chef in Santa Cruz, Calif., in 1999 when he recognized a growing disconnect between people and the keepers of their food. By bringing the table to the farm he felt he could bridge that gap while putting the spotlight on the farmer.

“Those back stories, the personal stories of the farmers are the reason you get into it,” Denevan says.

For him, it started with family. His older brother started one of the pioneering organic farms in California in 1974. That’s where Denevan hosted his second Outstanding in the Field dinner. “To see my brother appreciated for his work and story really made me want to make this idea work. Food with a good story adds to your meal. You’re going to taste that story, taste that place that you’re in.” 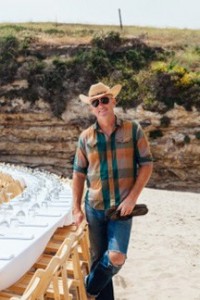 Denevan’s team will visit nearly 80 farms this year, but it’s doubtful that any will have a story to surpass that of Waseda Farms.

Farmer Tom Lutsey and his wife Sharon bought Waseda Farms from the Priests of the Sacred Heart, who had managed it for 47 years. The priests named it Waseda for the serenity of the pines that line the fields. Their influence is found throughout the property – grottos, fields named for the brothers, and a large cross on a hill that can be seen from passing vehicles on County Trunk A across the field.

The Lutseys grow organic produce and raise chickens, pigs and grass-fed cattle in the Temple Grandin fashion, a humane method in which they’re butchered using a system that shields the animals as they’re taken to slaughter. This prevents the fear and panic that shoots testosterone through their bodies in their final moments, damaging their meat.

Tom Lutsey started raising the beef when his doctors advised him that he could no longer eat red meat. He balked, and decided he would raise his own so he knew exactly what was put into them and how they were raised – and keep eating his meat.

Denevan says 75 percent of the tickets for the season of Outstanding in the Field sell in March the day they’re released. As of late June just 20 tickets remained for the Door County dinner (it has since sold out). But it wasn’t always this way.

Today terms such as “sustainability,” “farm-to-table” and “locally sourced” are ubiquitous, and restaurants proudly list on their menus the names of the farms where they source their food. But when Denevan started Outstanding in the Field, the dinner on the farm concept was not an easy sell.

“Just explaining what we do took an enormous amount of time because the concept was so foreign to people,” Denevan remembers.

Some of his early dinners attracted only a couple handfuls of diners, and it wasn’t uncommon for Denevan to give away dinners just to fill seats. He almost quit on multiple occasions, but by 2006 the tide was turning. Denevan doubles as an artist, creating massive temporary images on beaches and in snow. Range Rover asked him to do a TV commercial, bringing a cash influx. 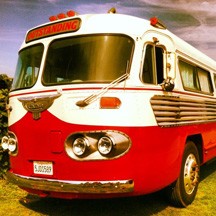 About the same time media outlets like GQ and CBS Sunday Morning wanted to do segments on the dinners. Soon, the table began to fill.

Now he can put a table on a farm in the middle of nowhere in North Dakota and fill it with diners who flock from surrounding states. He anticipates that at least 30 percent of his Door County diners will come from out of state.

Fifteen years after Denevan started serving dinners on the farm our appreciation for food sourcing still isn’t where it should be, but we’ve made strides. Even on the remote Door County peninsula, more restaurants are taking pains to support local farms open each year.

Tom Lutsey’s son, Matt, says it’s a cycle that builds on itself.

“The more restaurants who clamor for better food and better ingredients, the more people who will raise those,” Matt Lutsey says. “In Door County, people want good food, they don’t want fast food.”