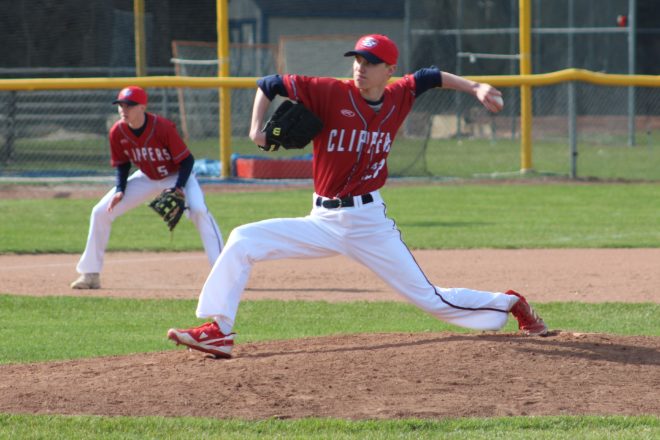 Sturgeon Bay’s Jace Johnson delivers a pitch in the first game of the May 5 doubleheader at Gibraltar. Johnson threw seven shutout innings in the Clippers’ 3-0 victory over the Vikings. Photo by Kevin Boneske.

Sturgeon Bay’s varsity baseball team scored all the runs it needed to win in the top of the second inning May 5 when the Clippers shut out Gibraltar/Washington Island, 3-0, in the first game of their doubleheader at Fish Creek.

The two Sturgeon Bay runs in the top of the second were set up by designated hitter Brody Kollath being hit by a pitch and catcher Curt Meyer advancing Kollath to third on a double. The Clippers then plated both runs on a Vikings error.

Sturgeon Bay – which tallied eight hits, two of them coming from Meyer – added an insurance run in the top of the seventh.

Sam Lindenberg pitched 6⅔ innings and recorded the loss for the Vikings, allowing all three runs, one earned, on eight hits while striking out six.

The two teams then played a nonconference, five-inning game that the Clippers won, 4-3.

At the plate, Lindenberg recorded a pair of doubles, and Rylan Caldecott added two hits for the Vikings.

Chris Lodl went the distance on the mound for Sturgeon Bay, allowing three earned runs on five hits with two walks while striking out five.