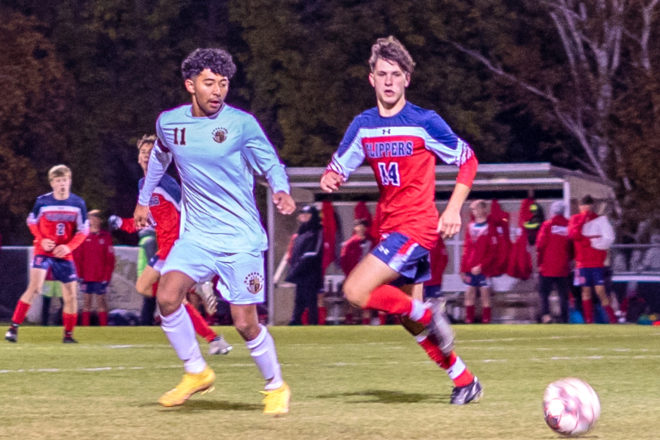 Despite giving up two goals by knocking the ball into its own net, Sturgeon Bay’s boys soccer team still pulled out a victory in Saturday’s WIAA Division 4 regional championship game at Dick Clark Field.

The No. 2-seeded Clippers defeated No. 7-seeded Wrightstown, 3-2.

The Clippers took a 1-0 lead within the game’s first 30 seconds when Gavin Fernandez scored on an assist from Isaac Schulz.

The Clippers extended their lead to 2-0 minutes later when Ben Hooker scored on an assist from Porter Gigstead.

After the game was tied 2-2 on a pair of own goals Maas described as “misguided headers,” Sturgeon Bay tallied the winning goal in the final seconds of the second half when Robert Alas scored on an assist from Johnny Hubbard.

The Clippers will host their sectional semifinal game Oct. 27 at 7 pm against No. 3-seeded Kiel.

The two teams faced each other this season on Aug. 29, when Sturgeon Bay won at Kiel, 3-2.

The sectional semifinal winner will advance to the championship game being held at Fifrick Field in Kiel on Oct. 29 at 4 pm to face the other semifinal winner between top-seeded Sheboygan Christian/Sheboygan Lutheran and No. 4-seeded Kohler.