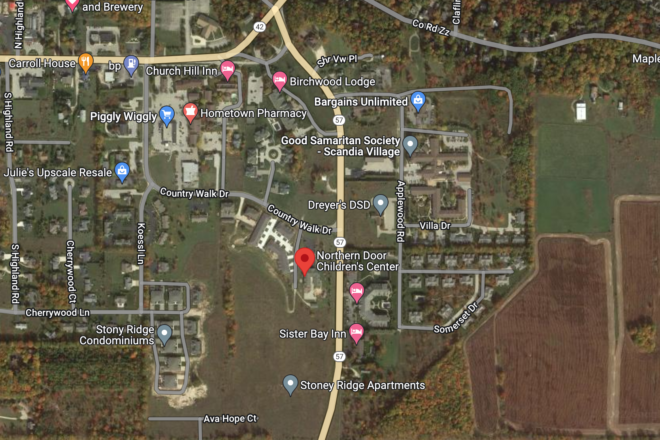 The Village of Sister Bay hopes to construct a new off-road path along Highway 57 to connect the downtown to the many services and residences that have moved into the “uptown” area of the village.

In the late 1980s, residential and commercial development in what some call “Uptown Sister Bay” expanded rapidly. But even as large hotels, single-family homes, a day care center, shopping and apartment complexes have been added to the landscape, nonmotorized connections for the people using those spaces were an afterthought – if they were a thought at all.

Now the village is making plans to change that.

The Sister Bay ad hoc Outdoor Recreation and Transportation Committee has recommended constructing several paths to connect the dots in the village, including an off-road paved path along Highway 57 to connect the sidewalk at the Highway 42/57 intersection to Orchard Road.

“We have a lot of housing, services and even the day care in that area, but we’ve never had a plan for safe pedestrian transportation there,” said village administrator Julie Schmelzer.

The village hopes to construct the path outside of the Department of Transportation right-of-way, which would substantially lower engineering and design costs. The cost of the path is estimated at $475,000-$500,000. Schmelzer said that funding will come from the TIF or the Premier Resort Area Tax, as well as through pursuing grant funds, and that the village aims to complete the path in 2023 if it gets approval from all affected landowners. Three have already signed off on the project.

Although the path will be a boost to recreational cyclists, Schmelzer and committee chair Nate Bell both said the plan’s primary objective is to improve transportation and safety, not recreation.

“This is primarily to connect the workforce and children from housing south of the village to the downtown area,” Schmelzer said. “It’s primarily a safety issue, but it has many other benefits.”

Over the last two decades, scores of homes and apartments have been built in the area behind the Country Walk Shops, but no pedestrian connections have accompanied that development. As a result, those residents – including families walking children to the Northern Door Children’s Center – often walk or bike on the shoulder of Highway 57 to get to the downtown core of the village.

For Bell, who is also a village trustee, improving the ability for residents to access services without cars is a passion. He has commuted to his job in Baileys Harbor primarily by bike for more than two years.

“There’s a complete domination of cars in our society,” Bell said. “We’ve made it impractical to consider walking or biking anywhere in the village. You have to be somewhat unhinged to go out and bike around. I’d like to not be the outlier who’s willing to travel by bike. We need to make it easier for people to do it.”

That’s what spurred Bell to ask to form the ad hoc committee last April to update the village’s Outdoor Recreation and Transportation Plan.

The path along Highway 57 isn’t the only one in the works for the village. The committee has also recommended the village widen shoulders and add paths on a smaller scale in several other areas of the community.

Priorities are hardpack gravel path and vita course to connect the sidewalk on Mill Road to Woodcrest Road by swooping behind the Sister Bay/Liberty Grove Fire Station. That path would provide a pedestrian connection between the village and the Sister Bay Sports Complex, where the dog park, ice rink, pickleball courts, soccer and baseball fields are located. This could also be completed in 2023 or early 2024, Schmelzer said.

On Country Lane, the village plans to widen the road to 24 feet below the Little Sister Hill, in cooperation with the Town of Liberty Grove – the neighboring township that’s responsible for half of the improvements to the road on the south end of the village. That would allow for wider shoulders for cyclists, connecting the village path that ends at Country Lane to Highway 42.

Bell said that creating safe, attractive connections for walking and cycling will not only benefit people using those modes now, but it will inspire others to shift their habits.

“In traffic, you have induced demand,” Bell said. “If you build a bigger highway, you get more traffic. It’s a negative thing. Induced demand for cycling and walking would be a very positive thing. It’s better for people and better for the planet. Once there’s a critical mass, it’s also safer. The more people who cycle and bike, it doesn’t make it less safe for people in cars.”

Other recommended changes include: