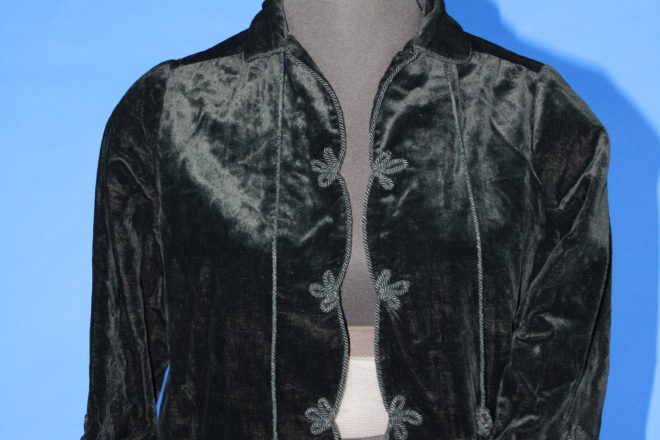 Catherine Grota Sahlin must have spent a lot of time in her grandparents’ attic when she was a little girl. As she told a large crowd at a recent dinner meeting of the Door County Historical Society, “People who lived through the Great Depression saved everything that might be useful.”

Sahlin’s grandparents were Dr. and Mrs. Hubert Grota. He was Door County’s “baby doctor,” delivering about 200 babies each year for more than 35 years. He was also the choir director at St. Joseph’s Catholic Church for 25 years; a member of two barbershop quartets, the Air-Conditioned Four and Four Men of Accord; a founding member of the First National Bank (now Associated Bank) and radio station WDOR, for which he broadcast a weekly program, Your Personal Health, and played Santa each year, reading children’s letters on the air. (Even his own children didn’t know who Santa was.)

Grota’s wife, Carrol, was the valedictorian of her class at the Chicago Normal School of Physical Education for Women and played on the field hockey team. She was a big promoter of Girl Scouting and girls sports, as well as a talented knitter and seamstress.

The Grotas believed not only in saving items that might prove useful in the future, but also in preserving the past. The attic of the Memorial Drive home they occupied in Sturgeon Bay for 50 years held not only his antique drum set, but racks and racks of period garments and, in many cases, the hats, shoes, purses and jewelry that went with each outfit. In addition to the clothing, they had photos dating back into the 1800s that showed several generations of their families wearing the garments.

These attic treasures may have had a strong influence on Sahlin’s future career because she earned a bachelor’s degree in apparel technology from Purdue University and a master of fine arts in textile design from the Rochester Institute of Technology – School for American Crafts. Her . professional background includes work as a bridal designer at House of Bianchi in Boston and as a costume technician at the BalletMet in Columbus, Ohio. For 18 years, she’s been a senior technical designer at the corporate headquarters of the Limited Too/Justice girls’ clothing manufacturer.

Sahlin’s most recent project was creating an exact replica of Barbara Bush’s 1989 royal-blue velvet and silk satin inaugural ball gown for the Bush Presidential Library in Austin, Texas. (The original, designed by Arnold Scassi, is displayed in the Smithsonian.)

As Sahlin displayed dozens upon dozens of old family photos on the screen, she also showed close-ups of the clothing or pointed out where the items were displayed around the room.

One of the first garments she described was her great-grandmother’s long, black dress with lace collar and cuffs. It was unusual in that it opened in the front for nursing a baby and included a loose, matching wrapper that could be attached to conceal a pregnancy if desired. Sahlin arranged her presentation chronologically, beginning in the 1890s, when peplums, balloon sleeves, lots of handwork and little boys’ shirts with round collars and big bows were in style.

Balloon sleeves were out by the early 1900s, and hair jewelry was in, especially fancy combs in topknots. When Hubert’s parents were married in 1909, the bridesmaids’ gowns had puffy sleeve caps. All the women had very small waists. Some of Carrol’s sheer baby dresses and slips were displayed, along with a hand-smocked girl’s dress. By the 1920s, skirts were getting shorter, and clothes had lots of ruffles. Carrol’s younger brother was in a marching band, and Sahlin said of his uniform’s impeccable crafting, “You don’t see that kind of workmanship any more.”

The dark-green satin dress with lavish lace that Carrol wore for her high school graduation was on display, along with the wool gym bloomers with elastic below the knees that she wore in college.

Other dresses from the 1920s included a chiffon frock with a dropped waist and ruffles; a silk velvet gown with silver appliqués; a red dress with satin trim, embroidery and appliqués; and a hand-painted dress with a netting skirt. Changeable clips for shoes were popular, as were fabric-covered buttons, dickeys and hats decorated with ostrich feathers. And under those gorgeous gowns? Corsets and lots of sewn-in boning. By the 1940s, shoulder pads and double-peplum suits were in style. Evening gowns had matching turbans. A ball gown with inset rainbow trim and a crepe dress with a lace bodice – accompanied by a straw hat with a velvet bow – were the height of fashion.

The displays also included Hubert’s lab coat, some of his medical equipment, his First National Bank jacket and a variety of hand-painted ties that he received as gifts.

Thanks to the Grotas’ bountiful attic, the Door County Historical Society’s event provided a glimpse at fashions – and a way of life – that are long gone.