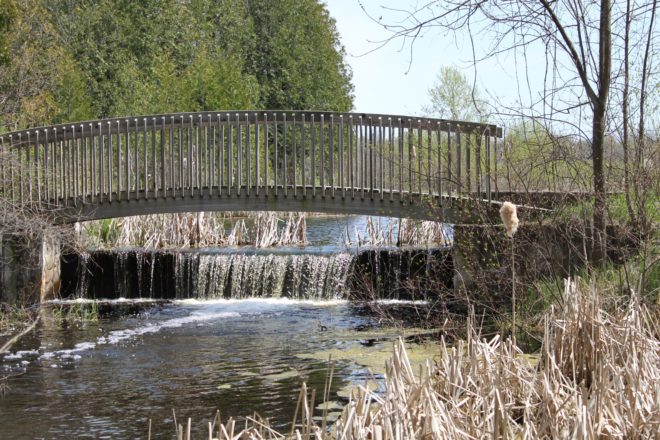 The dam behind Half Mile Bridge was built between 1966 and 1969 by Andrew Redmann with a permit from the Public Service Commission. The dam is believed to contribute to the lack of flow in Fish Creek in the summer. Photo by Jackson Parr.

At the second and final Gibraltar Plan Commission meeting regarding the state of water flow in Fish Creek (the actual creek, not the community), researchers and Department of Natural Resources (DNR) staff offered more details on the challenges in the creek, both past and present.

“It’s important for us to be paying attention and stewarding our water resource that runs through the town,” said Linda Merline, chair of the plan commission. “The creek is a spawning ground… and we’re hoping to bring that back. We’re hoping to address the invasive species problems, the storm water issues.”

At the outset of the meeting, DNR Fisheries Biologist Nick Legler provided background on a dam that was created around 50 years ago. Landowner Andrew Redmann built the dam to create a pond behind what is now the Half Mile Bridge condominiums.

Legler and DNR staff located the original permit for the dam, issued by the Public Service Commission on Sept. 22, 1966, before the DNR was created.

“The plan called for a dam with three-foot head and one acre impoundment behind the dam,” said Legler. “The general purpose listed was to create a farm pond.”

While Legler had the permit, he said the complete plans for construction and operation of the dam are on microfilm at an archive in Madison. His colleagues are currently tracking those down.

“Usually there are orders with a dam to tell how it is supposed to be operated,” said Nancy Turyk, Water Resources Scientist at UW-Stevens Point.

The dam does have a mechanism for regulating flow but it is not operational and both Turyk and local residents believe it hasn’t been inspected or functional in decades, potentially contributing to the very low flow of the creek during portions of the year.

“Statute requires that 25 percent of normal low flow needs to be passed,” said Legler of the current state law. But since low flow on the creek is often no flow, Legler did not know how the statute could be applied, especially since it was written after the dam was put in place.

There is a second dam on a non-navigable tributary to Fish Creek further upstream from the Redmann dam that is owned by Hedeen International, the same organization that owns Little Sweden. The DNR report on this dam does not have a date for when the dam was completed.

While damming of the creek is thought to contribute to the creek’s low flow during the summer, few residents and natives remember a time that the creek did not dry out during portions of the year.

The conversation then turned to the water quality of the creek and how to ensure that further development does not negatively impact the flow or quality.

Turyk said agriculture can often have deleterious effects on water quality and the watershed, but she doesn’t see that from test results in the creek.

“There’s a lot of impervious surfaces around here,” said Turyk. “It results in increasing the runoff to the creek quickly rather than letting it slowly soak into the ground.”

Water running across pavement also becomes warmer before dumping in the creek, destroying the environment for the fish that the Plan Commission hopes to see again.

“You need to think about how do you develop and mitigate those effects,” said Turyk. “We know that there’s not likely to be less development so you want to look at things we can put on the landscape to have a minimal effect on water temperature if you’re interested in the creek supporting species that are cold water species.”

Turyk is expected to complete a draft of plans for the creek by the end of June.

“We combine the known science and the local observation and, of course, rules and regulations and put them all together to create some guidance as to what you would like for the future in terms of fish, water quality and then the steps that would be needed to achieve those goals,” said Turyk.

Gibraltar officials will then be responsible for implementing the suggestions in the plan.