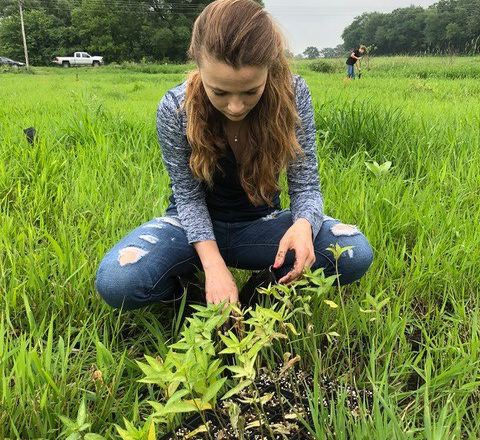 Monarch butterfly populations have dropped more than 80 percent during the last 20 years in the eastern U.S., and a new statewide consortium has formed to work together to reverse the decline in Wisconsin.

The Wisconsin Monarch Collaborative includes more than 70 stakeholders representing agriculture, transportation, utilities, public and private land management, research, education and government. With input from all sectors, the collaborative has drafted Wisconsin’s portion of a regional strategy that covers 16 states and is in the beginning stages of creating a Wisconsin Monarch Conservation Strategy. The state strategy will serve as a roadmap for voluntary statewide monarch conservation efforts and will focus on increasing monarch habitat, namely through increasing native milkweed and nectar plants.

“This is an all hands-on-deck effort,” said Owen Boyle, the Department of Natural Resources species management section chief and DNR’s lead representative for the Wisconsin Monarch Collaborative.

“Many people and organizations are already doing great work for monarchs. This new coalition will build on those efforts and help leverage resources to accelerate efforts to restore monarchs in Wisconsin.”

Craig Ficenec, co-chair of the coalition’s agriculture working group, said the effort can help proactively recover monarch populations before they might need to be listed as an endangered species, something that the U.S. Fish & Wildlife Service has been petitioned to do.

“Farmers and rural landowners are key to proactively and voluntarily recovering monarchs,” says Ficenec, program director for the Sand County Foundation, a national nonprofit based in Wisconsin that promotes voluntary conservation on private land. He works with farmers, rural electric cooperatives, and high school agriculture educators to plant monarch habitat.

Monarchs breed in Wisconsin and 15 other Midwestern states throughout the spring and summer and native milkweeds are the only plants on which monarchs will lay their eggs. In Wisconsin, as elsewhere, habitat loss is considered the main threat to pollinators including monarchs. Monarchs face special challenges as the distance increases between the remaining suitable habitat patches along their more than 2,000-mile migration route between their breeding grounds in the Midwest and their wintering grounds in central Mexico.

Receive periodic updates about the Wisconsin Monarch Collaborative and other news about monarchs in Wisconsin by subscribing to DNR’s monarch updates. Subscribe at dnr.wi.gov and search “pollinators.”