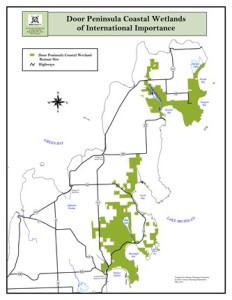 Door County conservation partners are pleased to announce that the Door Peninsula Coastal Wetlands complex has been designated a Wetland of International Importance under the Ramsar Convention, an intergovernmental treaty for protection of exemplary wetland systems around the world. The site joins Everglades National Park in Florida and Chesapeake Bay Estuary in Virginia as one of only 37 sites in the United States to achieve this designation.

A public celebration of the designation will take place on Friday, May 22, at 6:30 pm at the Maxwelton Braes Lodge in Baileys Harbor as part of the Door County Festival of Nature, an annual event hosted by conservation organizations and agencies in Door County.

“Here in Wisconsin, the Door Peninsula’s coastal wetlands have long been recognized as special places for nature and people,” said Nicole Van Helden, Nature Conservancy director of conservation for the Green Bay watershed. “Through the Ramsar designation, they have now been acknowledged as having significant value not only for Wisconsin but globally.”

“We are truly blessed to have this wetlands in our state,” said Katie Beilfuss, outreach programs director with the Wisconsin Wetlands Association and the keynote speaker at the May 22 celebration.  “Wetlands in Door County and worldwide provide many benefits such as water purification, flood regulation, recreational opportunities, climate regulation and habitat for fish, birds and other wildlife. For example, 75 percent of Wisconsin’s wildlife species depend on wetlands for some portion of their life cycle.”

Beilfuss said the Kakagan and Bad River Sloughs on Lake Superior, an area under tribal management of the Bad River Band of the Lake Superior Tribe of Chippewa, are the only other wetlands in the state to earn the Ramsar designation.

The extensive effort to earn the designation actually began in 2009 when the Wisconsin Wetlands Association came up with a short list of wetland gems in the state.

“The Door County wetlands were very high on that short list,” Beilfuss said.

The full nomination package was forwarded to U.S. Fish and Wildlife and then on to the Ramsar organization a year ago.

For taking the unique approach of listing important wetland sites, the Wisconsin Wetlands Association received an award from the Ramsar body.

“They would like to see more nations and states doing this,” Beilfuss said.

Among the reasons cited for recognizing the international importance of the Door Peninsula Coastal Wetlands were the following:

• The site encompasses more than 22 miles of protected Lake Michigan shoreline and protects some of the most biologically diverse habitats in the region from wet forests, sedge meadows and fens to springs, creeks and interdunal wetlands.

• More than 150 species of birds use the wetlands during the nesting season or as migratory stopover areas during the spring and fall. It’s a hotspot for warblers with 23 species documented there.

• A substantial population of a globally rare plant, the federally threatened Dwarf Lake Iris, is also found there. The only place in the world this plant grows is around the Great Lakes near the shores of Lakes Michigan and Huron in Wisconsin, Michigan and Ontario, Canada.

The land is owned by the Wisconsin Department of Natural Resources, Door County, the University of Wisconsin–Green Bay, The Nature Conservancy, Door County Land Trust, The Ridges Sanctuary, George and Sharon Cobb and Ed and Sandy Miller.

An important part of the nomination package was letters of support for the designation from property owners, a member of Congress (Sen. Tammy Baldwin did that) and community support.

“We placed our property into conservation easement because we believe it is essential to the life of our planet. Climate change is a fact, and this is a small effort to protect the natural world and leave a better place for our grandchildren and their children,” said property owner George Cobb.

“In thinking about what might happen to our 110 acres after we were gone, we realized we wanted to protect its natural beauty and ecological significance intact rather than subjecting it to any development or subdividing. The conservation easement offered by the Door County Land Trust gave us that protection,” said Ed and Sandy Miller.

“Decades ago, conservation pioneers like Albert Fuller, Jens Jensen and Emma Toft began working to protect the unique lands, waters and wetlands of Door County,” said Steve Leonard, executive director of The Ridges Sanctuary. “Later, others like George Evenson, Roy Lukes and Carl Scholz picked up where they left off. This designation is a testament to their conservation efforts and to the collaborative planning and partnership approach taken by private landowners, communities, non-profits and government today to continue the work they so passionately began more than 75 years ago.”

The Ramsar designation is entirely non-regulatory and does not supersede local ownership and management authority.

More information about the Door County Festival of Nature, which takes place from May 21-24, can be found at ridgessanctuary.org.