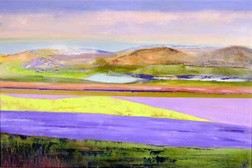 A painting by Baileys Harbor artist and writer Myrna Leigh Cohn has been selected for inclusion in the upcoming 25th Anniversary Later Impressions Exhibition 2013 in Chicago. This annual juried show is sponsored by Senior Artists Network (SAN), a not-for-profit organization committed to addressing the needs and concerns of artists age 50 and older.

“In 2003, I submitted works to this show and that was the first time I was ever selected in a juried exhibition,” says Cohn. “This is the third time since then that one of my paintings has been chosen. Last year’s selection, “Red, Yellow & Black” was purchased by a couple visiting Chicago from Toronto.”

“Heather & Green” is a vivid abstract work in water-based oil on canvas. Cohn says she was exploring the idea of using colors that she had never used before. She put the work aside for several months as a failed experiment, but later it started to grow on her. A few months later, she picked up those colors once again to pursue a resolution. What began as a pure abstract study eventually morphed into a surreal landscape.

The exhibition is held Sept. 16 through Oct. 20 in the Renaissance Court Gallery at the Chicago Cultural Center.

An ongoing collection of Cohn’s paintings is on exhibit in Door County at Champeau Gallery, located at 632 South Bay Shore Drive in Sister Bay. For more information visit MyrnaCohn.com.