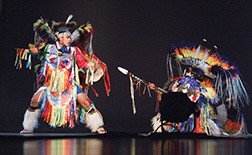 The Lakota Sioux Indian Dance Theatre will perform in Door County on Nov. 14.

In August 1990, President George H. W. Bush declared the month of November as National American Indian Heritage Month to honor Native Americans and encourage them to share their culture and traditions with their communities.

On Nov. 14, the Lakota Sioux Indian Dance Theatre will provide Door County residents an opportunity to learn about the Lakota people through its program, Cokata Upo! (or Come to the Center).

This three-part, evening-length dance and song program shares the story of the birth, death and rebirth of a nation. More than 20 traditional and sacred songs, along with narratives, creation stories and video imagery will support the South Dakota-based dance theater in its mission.

The program’s first section, Birth of a Nation, focuses on traditional Lakota creation stories, while the second, Death and Rebirth, focuses on a “turbulent present,” and the third part, All Nations as One, shares a hopeful outlook for a united and peaceful future.

Eight world champion performers will take the stage that evening, dancing, singing and playing instruments while donning costumes they made by hand. Nine dances will be showcased during the performance, including Grass, Jingle Dress, Fancy, Traditional, Horse, Buffalo, Eagle, Round and Inter-Tribal. Buck Spotted Tail, the artistic and cultural coordinator for Lakota Sioux Dance Theatre, has been with the company for 19 years. 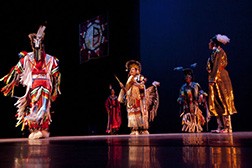 The dances will be accompanied by traditional songs and storytelling and performed against a backdrop of video imagery, a tool the company uses to illustrate life on reservations.

The Lakota Sioux Dance Theatre was founded in 1978 on the Rosebud Reservation in South Dakota with the support of educators, powwow dancers, singers and storytellers. It operates under the direction of choreographer Henry Smith and tours internationally.

The Lakota Sioux Indian Dance Theatre will perform at Door Community Auditorium in a public performance on Friday, Nov. 14 at 7pm. Tickets for the concert range from $15 to $36. Advance reservations are recommended and can be made through the DCA box office, 3926 Hwy. 42 in Fish Creek. The box office is open Monday-Friday, 12 – 5pm. Tickets can be purchased in person, on the phone at 920.868.2728, or online at dcauditorium.org. Thanks to generous sponsorship support, DCA is able to offer a limited number of special $5 tickets for Door County students and families.