It was around 40 years ago while attending an Inland Bird Banding Association annual meeting, involving bird banders from 22 states and four Canadian provinces, that one of our workshop experts, Chandler Robbins of the U.S. Fish and Wildlife Service – Small Bird Division, shared many fascinating research results with us.

One was related to how quickly small songbirds can recover their population following major catastrophic incidents. Chan told us that a species can lose as many as 50 percent of its total numbers one year and that, with good nesting conditions the following season, bring back its population to normal levels within a one-year period. 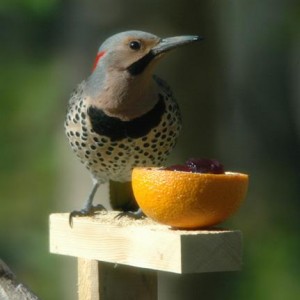 A Male Flicker at the jelly we stuff into emptied orange halves.

A day doesn’t go by without our learning that more and more of our songbirds are plummeting in numbers annually, largely brought about by human-caused changes in the environment with which the birds are unable to cope. However, one frequently overlooked factor leading to the decrease in bird numbers is related to weather. Dr. Thomas S. Roberts, in his excellent Birds of Minnesota (two-volume set) gives an example regarding a bad storm that hit thousands of Lapland Longspurs (small songbirds) during their spring migration through northern Minnesota. An estimated 750,000 frozen Longspur bodies were discovered the morning after the storm on two frozen lakes, each a mile square, and equal or greater numbers were found on adjoining fields, the streets of a town, and the flat roofs of buildings.

Cy Cabot of the old Wisconsin Conservation Department (now the Department of Natural Resources) reported Tundra Swans being hit by a hail storm during their migration in the spring of 1954 in western Wisconsin. At least 35 of the large white waterfowl were found dead, many with multiple bruises on their bodies and heads caused by the unusually large hailstones.

Our weather this spring has been extremely difficult for the birds. The TV weather people informed us that the first week of June was the coldest stretch of June weather in the past 62 years. The high temperature on June 8 was the coldest high for that date since 1945. What a dramatic and dreadful number of cold fronts, carrying wintery Canadian air and further cooled by winds off Lake Michigan, have swept down upon us in recent weeks. During warm and hot summer weather one’s car windshield becomes well-splattered from hitting insects. Now during the cold weather spell, car windshields remain quite clean.

Eastern Phoebes that have nested successfully at our place over the past 27 years began their nests this spring, laid a few eggs, and then apparently gave up and presumably headed for Hibbards Creek a mile east of us, where insect catching – their life blood – was better. We still haven’t seen them back to our front yard.

Several of our 50 Eastern Bluebird nests were recent failures, some with dead starved babies inside. Whenever insect catching virtually comes to a standstill due to cold wet weather, the adults feed themselves while their young in the nest receive food only after the adults have been nourished. It is a well-proven fact that birds eat more food during cold weather than during warm weather.

The Scarlet Tanagers and Baltimore Orioles that feed daily at the oranges and grape jelly on our platform feeders use this food only to supplement their usual diets of insects, caterpillars, etc. It’s during rainy and cold weather, when there are few insects to be found, that these primarily insect eaters learn to eat our “marvel meal,” the peanut butter concoction we’ve been using very successfully for many years. We feel that the tanagers and orioles have learned how to get at the marvel meal by simply watching how the woodpeckers, nuthatches and chickadees go about it. 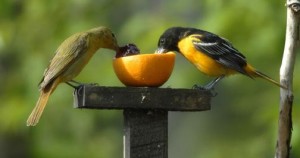 The male Scarlet Tanager often perches on top of the metal squirrel-baffle below the marvel meal feeder waiting patiently for bits of this food to be accidentally dropped there by the woodpeckers. The Baltimore Orioles quickly learned how to get inside the metal cage (which prevents the Blue Jays from emptying the feeder in just minutes) and feast on the peanut mixture just as do the woodpeckers and other birds.

The belief is that bird species, such as nuthatches, grosbeaks, cardinals and chickadees, which appear to feed mainly on seeds at the feeders, mostly (if not entirely) feed their young insects in the nest. However, we have observed the woodpeckers cram as much marvel meal as is physically possible into their beaks to be taken back to their nestlings. In fact, it won’t be long before the adult woodpeckers will be bringing their young to the feeder where these fledglings will soon learn to feed themselves – on marvel meal. We are not implying by any means that our homemade bird food, the marvel meal, is better than the birds’ natural food. However, it is a fairly well-balanced and nutritious meal. 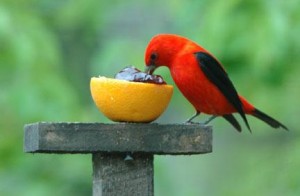 A rare Summer Tanager and a Baltimore Oriole sharing the food.

Finally, after many years of trying, I had a camera in hand at just the right time and was able to capture a male Cardinal gently and tenderly feeding his mate. She was also in the process of cracking and devouring sunflower seeds by herself while Mr. Cardinal cracked several and then fed them to the female. One can only wonder if he knows that she has been spending much of her time during daylight hours, either incubating eggs or keeping her young warm in the nest, and is unable to find as much food as he can.

One thing we must bear in mind is that autolycism (aw-TOL-ih-cizm) is in progress nearly everywhere one looks, the dependence of almost every form of life on some other form. Sit back, observe in awe and remember that the better we care for the environment the better will be the chances for birds and other wild creatures to survive.