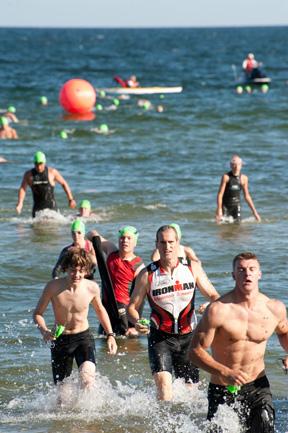 The polar vortex of 2014 isn’t loosening its grip on the county yet.

This winter’s deep freeze continues to chill water temperatures in Lake Michigan and Green Bay, which could impact the Door County Triathlon July 19 and 20. Director Sean Ryan says he has given participants extra warning about the water temperature, which has been hovering in the low 60s.

Athletes chop through the water at the Door County Triathlon. Photo by Len Villano.

The warmest water temperature in the previous nine Door County Triathlons was 73 degrees while the coolest was 61 degrees.

Ryan says a lot of the athletes do very little preparation for open water swimming, instead training primarily or exclusively in the safe, calm confines of the pool. Athletes can acclimate to cold water, but when the cold is combined with the swinging limbs of competitors and choppy water, inexperienced open swimmers panic. 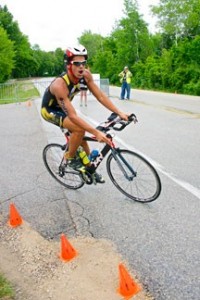 In most years, fewer than 10 swimmers are pulled from the water. In the worst year of cold, choppy conditions, 35 swimmers were pulled by emergency personnel.

A wet suit helps swimmers handle the cold, and Ryan has told all participants to bring one. When registering for the half iron distance, all participants must check a box that says they will have a wet suit available. When water temperatures are at or below 65 degrees, Ryan reserves the right to require that competitors wear a wet suit.

As of Monday night, Ryan was inclined to invoke the requirement this weekend.

“If you decide to gamble and not bring a wet suit, don’t blame us when you’re not allowed to compete,” Ryan says.

If the water temperature is deemed dangerous, officials can also shorten the swim portion of the race. Ryan said it would take extremely bad conditions for him to shorten the half iron swim, however. 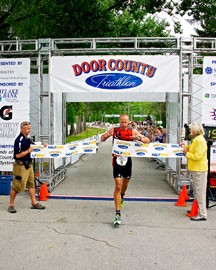 “We can do that in the sprint because it’s not an official distance, it’s more arbitrary,” he says. “But with a half iron, these people are more prepared and have a lot more invested. They’re doing this to complete a defined half iron distance triathlon. So I’m not inclined to shorten that.”

The Half Iron takes place Sunday the 20th and features a 1.2-mile swim, 55-mile bike ride, and a 13.1-mile run. More than 2,000 athletes from around the country will participate in the race, which raises more than $80,000 each year for the Door County YMCA and Door County Parks.