When Roy Oshkosh was a child, he was fascinated with the stories his grandmother told about his ancestors who had a campsite in what would later become Door County. She told him that someday he should search in the middle of the peninsula for a babbling brook running through a wooded glen, then disappearing into the ground never to be seen again. 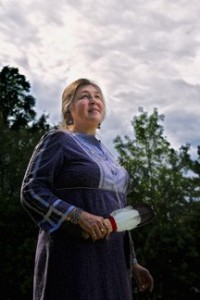 Roy’s father was chief of the Menominee Nation, but it was not a title the boy expected to inherit as he had an older brother. Roy earned a degree in engineering from Carlisle Indian Industrial School in Pennsylvania and had a good job in Chicago, but when his brother indicated he had no interest in becoming chief, their father asked Roy to return home and prepare to assume his responsibility to his people. His father passed away in 1932.

In 1939, Chief Roy was recruited to work as an engineer in the Sturgeon Bay shipyards. He intended to return to the reservation when World War II ended, but friends persuaded him not to leave Door County. In 1945 he found a spot like his grandmother had described and built the Chief Oshkosh Trading Post on Highway 42 south of Egg Harbor, with a 600-seat amphitheater behind it where he staged weekly summer pageants. Roy was highly respected for his knowledge of Native American traditions and his contributions to community life, especially his work with Boy Scouts.

When he died in 1976, ownership of the trading post passed to his widow, Agnes, and her daughter, Jeanette. One of their neighbors was Coleen Bins, a young Oneida girl who had graduated from high school in Green Bay and came to Door County to earn money for college. She found work at a variety of places, some still here (the Greenwood Supper Club and the White Gull Inn) and others (Powell’s Country Inn, the Rock and Don and Les Casey’s) long gone.

“The first time I went into Roy’s trading post after his death, I cried,” Bins says. “The beautiful things Roy had stocked were gone. I don’t blame Agnes and Jeanette, who were doing the best they could, but they didn’t have Roy’s knowledge. They’d hired marketing people, who advised them to sell inexpensive ‘kitsch.’ Indian items from Japan, China, and even the Cherokee – play hatchets and bows and arrows. It was what was expected and accepted at the time. I am thankful this is changing, and there is more respect for the true art work of Indian people.”

She attended the Institute of American Art in Santa Fe, New Mexico, and did graduate work in Rochester, New York. When the Turtle School (the symbol of Mother Earth to the Oneidas) opened on the Oneida Reservation near Green Bay in 1994, Coleen joined the faculty. She especially approves of the curriculum that combines the Three Rs with classes in the Oneida language, music and other traditional elements of the tribe’s culture.

In 1997, Coleen bought the Chief Oshkosh Trading Post, which had stood empty for several years, and changed the name to Chief Oshkosh Native American Arts. Coleen stocks exquisite, authentic Indian art from Wisconsin and across the country. 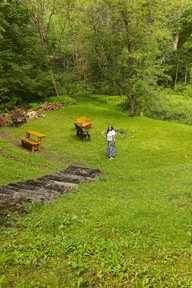 Like Chief Oshkosh, she is a traditionalist, proud of Native American history and traditions and dedicated to helping others understand and appreciate them. She believes strongly, for example, that all peoples originally lived in harmony with nature and felt it was their responsibility to protect the environment. She believes it is the destiny of Native Americans to lead others back to that way of life. Coming from a tradition of caring for one another’s needs, it is hard for her to understand a culture that turns sick people away from health care facilities because they have no insurance.

Coleen is sad that so many people have a distorted view of Indian beliefs and customs. Wampum (beads), she says, were never used as money, but as symbols of spirituality. The  “Two Row” wampum belt currently being carried down the Hudson River to be presented to the United Nations is a reminder of the treaties made between the U.S. government and Native American tribes, pledging to live alongside one another in peace.

“Indian nations were the original true democracies,” Coleen says. “There was no voting, but the grandmothers picked tribal leaders, and every leader had a clan mother he answered to. Lacrosse (the Creator’s game in our language) was originally developed by the Iroquois Nations, not as a game, but as a way of preventing battles. If groups disagreed on something, they played lacrosse and the first side to score got to decide the matter.

“So much of what people believe about our people are the observations of non-natives,” Coleen says, “as if they looked through a window and drew their own conclusions about what they saw, without asking anyone inside for an explanation. Our people don’t worship anything. Rather, all our ceremonies are about thankfulness and our connection to Creation. Thanksgiving is every day for us.”

Coleen is in the process of restoring “the mini-bowl” (named after the “woodland bowl” on the Menominee reservation) behind the store where Chief Oshkosh held regular entertaining, educational programs featuring Native American storytelling, singing and dancing. By next summer, she hopes to stage activities to help both adults and children learn and appreciate. Fundraisers will be held to help pay for permanent seating, and she is hoping to find business people and individuals who are interested in being involved in resurrecting the programs for another generation.