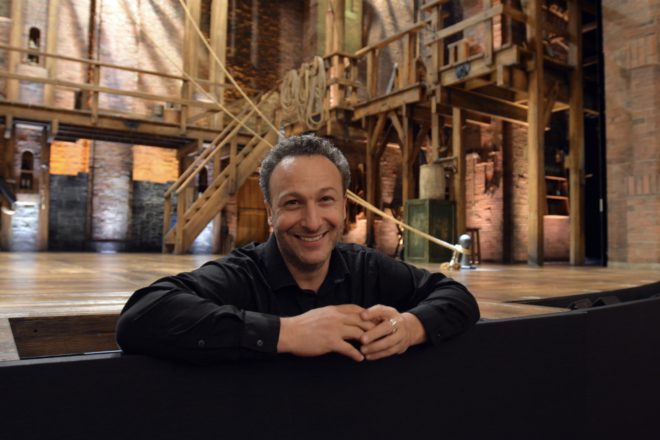 Whenever Colin Welford seemed close to settling down, his career had a way of taking him somewhere new.

He was a British child prodigy in music who traveled the world for years as the conductor of the English National Ballet and as the music director or supervisor for shows such as The Lion King, Wicked and Billy Elliot on Broadway and abroad.

In 2009, his journey took him to American Folklore Theatre (AFT) – now Northern Sky Theater – as the music director for the summer. Welford fell in love with Door County and was able to continue working on the “big” musicals elsewhere for the rest of the year. His connection with AFT/Northern Sky Theater continued as he produced arrangements and orchestrations for summer shows here while continuing to conduct elsewhere.

Eventually wanderlust started to lose its luster, and Welford began to think of settling down somewhere. The “home” that called to him was Door County.

In 2018, during a short visit to the peninsula while working as the music director of Hamilton in Chicago, he mused about local properties, eventually settling on the Green Gables complex in north Ephraim. The 12,000-square-foot complex included a house and eight shops on nearly two acres.

Former owners Dawn Sandusky and Gary Kircofe stayed on during Welford’s first year, helping him to learn how to run the place and repair things, and whom to call.

“I got schooled in ‘country ways,’” Welford said. He’d had years of gardening experience, but maintaining a large property in a climate such as that of Door County was something new. To make his introduction even tougher, for his first six months, he continued to conduct eight Hamilton shows a week in Chicago.

“I’d drive 285 miles north after my Sunday matinee,” he said, “sometimes arriving here as late as 3 am – including the occasion on which a guy on a snowmobile and I were stranded for two hours in Sturgeon Bay when the barriers for the bridge were down and no one was on duty.”

Welford said he worked feverishly to prepare the house for summer rental on Mondays and make it back to Chicago in time for Tuesday rehearsals. It was exhausting, but fun.

“I soon came to realize it was actually the first time I’d ever worked for myself,” he said. “The way I structured each day was now all in my hands, whereas on a musical, the schedule is entirely fixed, and each performance is a repeat of the last.”

When Welford bought the building, several businesses occupied it, but Sandusky and Kircofe were retiring their Scrimshanders store; Northern Sky Theater was building its new campus; and Peninsula Music Festival was in search of its own property. Welford also acquired the former Door County Sled Dogs location to the north and set about remodeling the buildings into vacation homes.

But the gardens surrounding the property – huge, Prairie-with-a-hint-of-English-style gardens in front and in back of the complex – are the heart of his vision and his real dream for the place.

Working with Tom Wolfe, a renowned local horticulturist who, for 34 years, was head gardener at the Art Institute of Chicago, Welford planted more than 6,000 bulbs last fall, as well as nearly 80 trees behind the complex. He, Wolfe and friend Bob Kaminski are designing and implementing the layout of what they hope will be a truly distinctive garden.

Welford discovered that building, decorating and planting all satisfy his creative spirit in much the same way that music has for most of his life. But music is still very much present. Rev. Dawn Volpe, pastor of the Moravian Church in Ephraim, heard him playing the piano one day at the Unitarian Universalist Fellowship of Door County (UUFDC) next door to Green Gables and asked whether he perhaps also played the organ.

As it happens, the organ was originally Welford’s primary instrument. He began playing at age 11 and eventually went to Oxford University as an organist. Although seemingly headed for a career as a cathedral organist, he then discovered orchestral conducting. As a result, his organ playing suffered a lapse of 28 years until he discovered the “sophisticated” organ at the Ephraim church, which he now plays every Sunday and in online videos.

“So I’d say my days mostly revolve around two things now: music and working at Green Gables,” Welford said. “It may be carpentry, stonework or yard work; or learning a tricky Bach organ fugue; or searching for something among the furniture that’s spread out all over the buildings, and which could be simply anywhere!”

Well, those things and a bit more.

“I’ve really enjoyed becoming part of the local community,” Welford said. “Not only playing the organ at the Moravian church, but also playing at the UUFDC, continuing my association with Northern Sky in some of its online events, making good new friends, participating in a few village committee meetings and, most recently, directing the music for the annual musical production at Sevastopol School.

“I’m very satisfied, and to be honest, I haven’t looked back to the big city yet.”