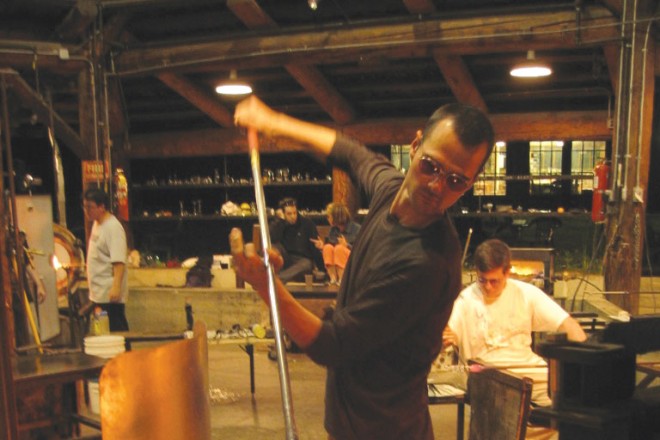 Since ancient times the human species has been drawn to the ethereal beauty of glass. We have imbued its cool transparency with almost mystic meanings. Some believed magicians could predict the future by gazing into a crystal ball; others used glass images to impart cultural and religious values. Glass beads and trinkets were buried with the dead, carried for good luck, worn as jewelry, and even used as currency.

All that is required to make glass is a little sand, a little soda, a little lime and a lot of heat. Making the glass is the easy part. Making glass art requires ingredients that are more rare: intense talent and a cadre of similarly gifted artists. Unlike most art forms glass blowing can only be done with the help of other artists. At Popelka Trenchard Glass in Sturgeon Bay two artists and a skilled assistant spend their days designing art alone and making art together.

Jeremy Popelka and Stephanie Trenchard met as undergraduate art majors at Illinois State University in the early ’80s. On a whim Jeremy took a glass blowing class at ISU with Joel Meyers (an internationally celebrated glass artist) and he was immediately drawn to the medium.

Jeremy says that interest in glass was exploding in the United States in the ’80s for a number of reasons. New technology made it possible for modest size furnaces to produce the high heat needed to make glass and therefore the medium became accessible to small groups of artists. In addition, young artists were more willing to abandon the American “individualist” model of doing art. Glass blowing involves the coordinated effort of several people who variously sift sand, heat materials, ladle molten glass, and slice and cool sculpted forms. One artist “owns” the artistic element of the piece and the others assist in bringing it into its final form. Unlike other forms of art, this process is fundamentally collaborative, requiring not only shared work assignments but also shared aesthetic standards.

After completing their undergraduate work, Stephanie and Jeremy married and moved to San Francisco where Jeremy completed an MFA (with high distinction) in glass at the California College of Arts and Crafts. During that time Stephanie worked as a textile designer. In 1997 they moved to Sturgeon Bay, drawn to Door County by Stephanie’s memories of spending summers here and the stimulation of the natural beauty of the landscape. Stephanie says their family (two children, Madeline age 13 and Jackson age 11) has prospered here and the strong community support for their work has sustained and encouraged them as artists. Their work is shown in galleries across the country and from their studio in Wisconsin they have garnered a national audience.

Jeremy has worked in glass for over 25 years and has won national and international attention for his cast sculptures and Murrini style pieces. One indication of his stature in the glass community is that he was recently asked to conduct a workshop at the Pilchuck Glass School in Seattle. The Pilchuck School is the pre-eminent glass school in the world with an international roster of faculty and students.

Jeremy’s cast work sculptures reflect his fascination with archaeological and archetypal images. He clearly succeeds in his objective to capture oral traditions in art form. His Murrini style blown works are a virtual cacophony of color, inviting the viewer into a world of visually liquid hues and form.

Jeremy describes himself as “a restless thinker about the work and where it is going.” He says it is a challenge to stay mindful of the technical precision of the work while staying in touch with the “artist child” within that wants to experiment. “After 25 years of blowing glass you are always looking for the next challenge. The challenge with the new Murrini pick-up technique I am using is to choose the right colors and allow the pattern to complement the final shape. A certain amount of ‘material license’ must be allowed to give each piece uniqueness as well as a chance for me to discover something new.” He considers each piece a colorful, emotional journey with many obstacles as well as elements of surprise.

Shortly after the hot glass studio was up and running Jeremy suggested that Stephanie try her hand at glass making. Her initial reluctance was based on her awareness that glass is a demanding and difficult medium to master. It is expensive and it has a high failure rate . And like other artists she wondered how the “factory” model of art would change her work. As an artist, wife and mother Stephanie says she has always worked to balance the weight of art and family in her life. By adding the collaborative process of glass making she was accepting yet another dimension into an already precarious balancing act.

Stephanie met with immediate success, winning Best in Show at the Minneapolis Art Festival in 2000. She has worked in glass ever since. Stephanie begins with an image that catches her attention such as a face, a house, or a chair. She builds a story around the image as she works. “The object is created first, hand painted, and then it is encased within the molten glass. I consider these pieces to be still life paintings in glass.” Often she tells buyers about the story but insists that her meaning does not define the work; rather there is room for each viewer to interpret the work from their own perspective. She says she is enthralled by the “luminosity and vibrancy” of three-dimensional glass art. Stephanie says that in many ways glass art transcends what can be achieved with paint alone.

At about the same time that Stephanie made the shift to glass making, Scott Kelly joined the business as an assistant. Scott joined the studio with a background as an inventor. He has received regional recognition for inventions with bicycles, cars and windmills. He initially helped design and build the studio equipment and has become an integral part of the creative aspects of the studio over time. He now creates mold blown bottles that reflect the natural forms of trees, fossils and corals he finds while hiking in Door County.

For Stephanie, Jeremy and Scott a philosophy of collaboration imbues every level of their work. Each draws from aspects of their individuality, from their talents as artists, and from their technical and interpersonal positions as team members.

Jeremy believes “you do not choose to be an artist, art chooses you.” However, both Stephanie and Jeremy are adamant that a full commitment to a life of making art is essential to doing it well. Balancing this commitment and all its collaborative demands with the other important parts of their lives is an ongoing challenge. As parents and partners they both feel a deep pull toward their work and their family and toward doing both endeavors well.

For most of us glass is all but invisible in our lives. We look without noticing through glass windows, eyeglasses and beverage containers. For the artists at Popelka Trenchard Glass studio, glass is anything but invisible. Glass, with all its translucent, emotionally resonant qualities, is at the center of their artistic collaboration and at the center of the life they share. Clearly their art adds a luminous quality to our lives as well.