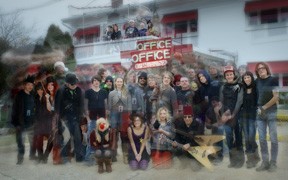 This year’s Dark Songs’ participants take a break from songwriting and costume planning to gather outside the Holiday Music Motel. Photo by Len Villano.

For the past week musicians and songwriters including Geri X, Ruby James, Vincent Gates, James Hall, Chris Aaron, Kim Manning, and many, many more, have gathered together at the Holiday Music Motel in Sturgeon Bay writing ‘dark’ songs, planning costumes, and recording original music. On Oct. 26 and 27 the weeklong writing event culminates in memorable performances at Cherry Lanes and Third Avenue Playhouse.

Participants arrived on Sunday, Oct. 21, visited over dinner, listened to tracks from the three previous Dark Song events, and then played spin the bottle. The game is not played in the classical sense –writing partners, not kissing partners, are chosen through the process, though “we cannot say for sure what will happen. There have been cases,” laughs mAcdonald.

After writing groups are chosen, “They are off and running,” says melaniejane, fellow musician and event organizer.

During the game, three writers are grouped together. “In a group of two both people feel this great pressure, this equal responsibility, whereas in a group of three you can always have one sit back a little bit and judge what’s going on,” explains mAcdonald. “It’s a really good system – good songs get written.”

The event first took place in January of 2009. “It was the middle of winter, a great way to relieve the boredom,” says mAcdonald of the inaugural event that was inspired by, of all things, a domain name. 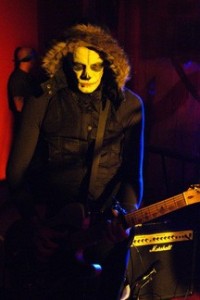 “I have a domain name addiction,” laughs mAcdonald, who had registered http://www.edgarallanpolka.com just before Poe’s 200th birthday. “Whenever I think of a funny thing like that I register it. That one kind of stuck out. Then I found out it was Poe’s 200th birthday and then I started digging more into his stuff.”

Poe’s dark and gothic material serve as an inspiration for Dark Songs, along with polka music, which mAcdonald attributes with “a kind of grotesquery,” he explains. “When I was a kid my parents would go to these parties and I would go and they’d be polka parties, and it’d be like monsters walking around with those accordions. I think the polka theme fits.”

Though songs produced over the course of the week showcase a wide range of genres, from rock and roll to folk to psychobilly. “People think it will be this dark, heavy thing – but there are so many fun songs,” says melaniejane.

“We don’t discourage people from writing some really dark stuff, but by the time it gets to the stage it’s just a really fun, and funny, show,” says mAcdonald. “A lot of Door County lore goes into these songs. Often its disguised, often it’s as naked as can be. We don’t have any rules about that.”

The final performance is “a real vaudeville variety format,” says mAcdonald, who notes that celebrated go-go dancers, Savage-a-GoGo, participate in the shows.

“The beautiful thing about Dark Songs that is different than Steel Bridge is that rather than spreading out all over town at the end of the week, we all stay together for the shows,” says mAcdonald.

“There’s not individual performances, everybody’s playing,” adds melaniejane. “It’s collaborative writing, collaborative performing. There’s no one spotlight shined on anybody, it’s on everybody.”