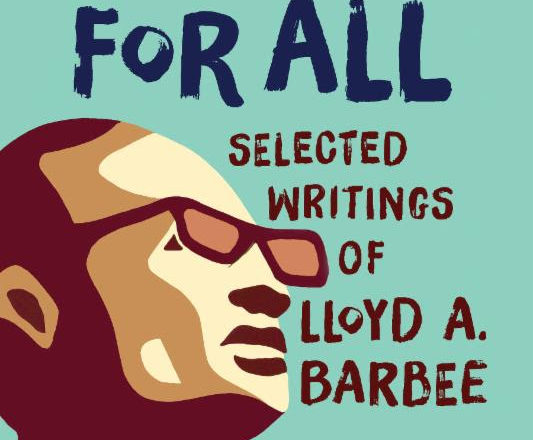 Civil rights leader Lloyd A. Barbee frequently signed his correspondence with “Justice for All,” a phrase that embodied his life’s work of fighting for equality and fairness – a phrase that has become the title of the Wisconsin Historical Society Press’s new collection of his work and insights, Justice for All: Selected Writings of Lloyd A. Barbee.

An attorney most remembered for the landmark case that desegregated Milwaukee Public Schools in 1972, Barbee stood up for justice throughout his career, from defending University of Wisconsin students who were expelled after pushing the school to offer black history courses to representing comedian Dick Gregory, who was arrested after stepping out of a line at a protest march. As the only African American in the Wisconsin legislature from 1965 to 1977, Barbee advocated for fair housing, criminal justice reform, equal employment opportunities, women’s rights, and access to quality education for all, as well as being an early advocate for gay rights and abortion access.

Edited by his daughter and civil rights lawyer, Daphne E. Barbee-Wooten, Justice for All shares Barbee’s writings from the front lines of the civil rights movement, along with his reflections later in life on the challenges of legislating as a minority, the logistics of coalition building, and the value of moving the needle on issues that would outlast him.

To order a copy of the book go to wisconsinhistory.org/shop.